Move Over Tea Party, #COVID4America Is Taking Over

UPDATE 1:40PM: The very same far-right conservative firebreather Michelle Malkin (see below) is on the scene of today’s hot mess of an “Operation Gridlock Denver” protest, and the rich, tangy irony warms our hearts:

And she’s meeting the most amazing friends: 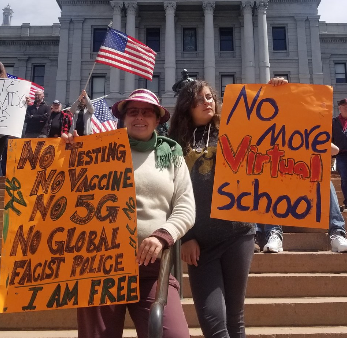 Stay safe, which at the moment means well away from downtown Denver.

UPDATE 1:05PM: Welcome to the next COVID-19 hotspot, Denver: 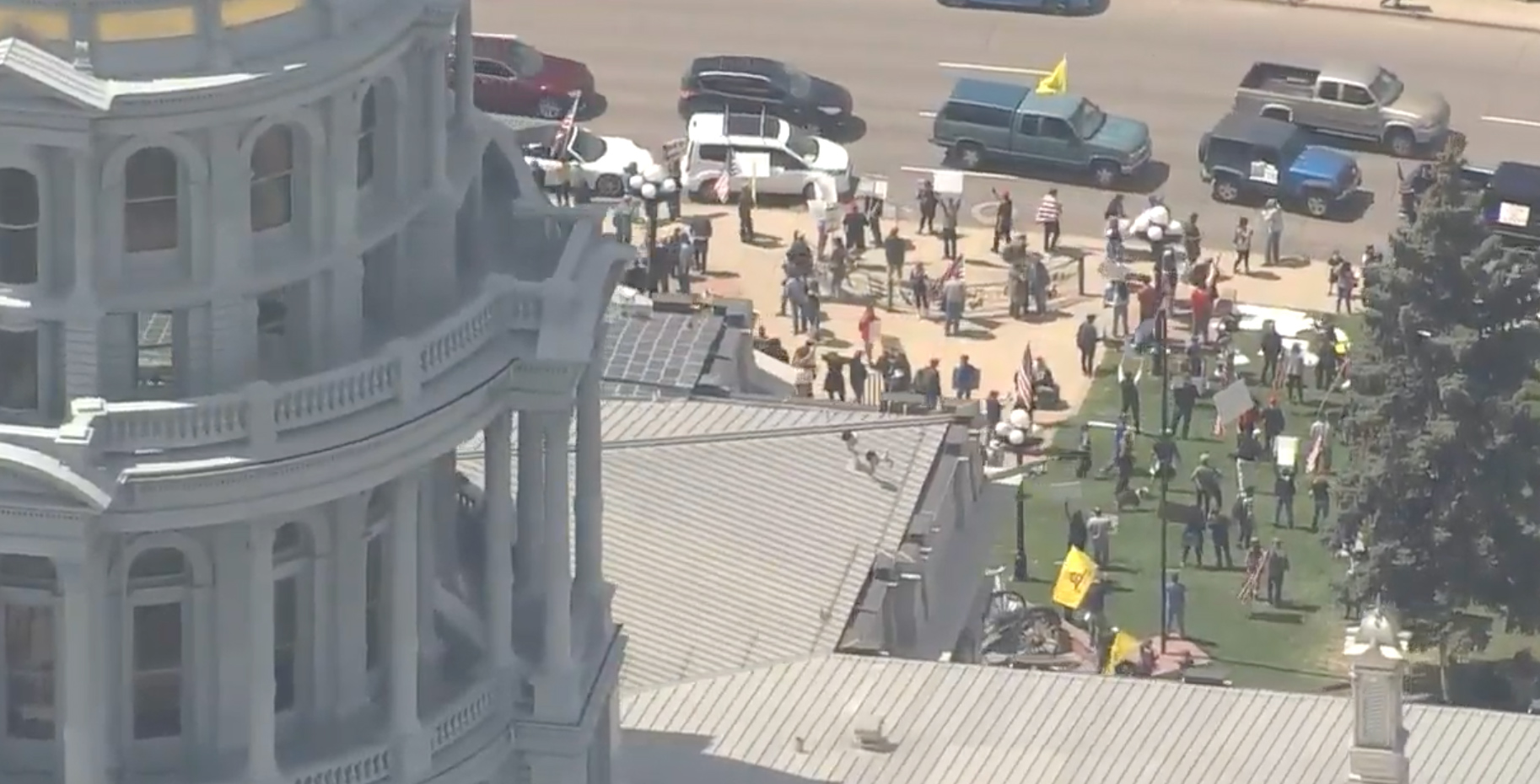 Not much of a “gridlock” in this photo, but that’s too close pedestrian patriots. Too close. 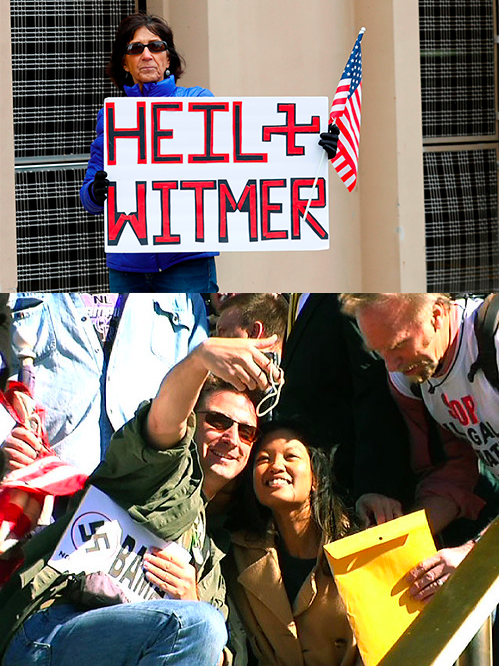 As readers know, some manner of protest is expected to take place later today in downtown Denver in the streets around the state capitol building, part of a nationwide “movement” of similar protests to one that occurred in Lansing, Michigan last week–protests that appear to have a been organized by a relatively small group of well-funded right-wing activists, in many ways echoing the “astroturf” organization of the so-called Tea Party protests against basically every action President Barack Obama took in 2009-10.

Apropos, former Speaker of the Colorado House Dickey Lee Hullinghorst has a new guest column for the Denver Post recalling the Tea Party’s rise in 2009, and how different things might be today if Republicans were as supportive of Obama’s economic stimulus package as they generally are of President Donald Trump throwing trillions at the economy for the same purpose:

Obama signed the stimulus into law at the Denver Museum of Nature and Science on February 17, 2009, as a gesture to Denver’s role in his recent election and as a way to showcase the green energy investments loaded within the stimulus package. His program included cash infusions to prop up demand in a cratering economy, tax cuts and payments to working families, money to shore up faltering state budgets, and extended unemployment benefits. These features are all found in the package that just passed the Senate with unanimous Democratic and Republican votes. In 2009, not a single Republican in the U.S. House voted for the bill, and only three Republican senators did. This included Sen. Arlen Specter of Pennsylvania, who the Tea Party Republicans would drive out of the Republican Party for it…

Now as Colorado’s senator, [Sen. Cory] Gardner just voted for a spending bill that’s more than twice the size of Obama’s. Gardner even advocated for specific policies that would have been indistinguishable from the arguments for Obama’s bill in 2009. But you see no Tea Party rallies in front of the capitol steps. And you hear no concessions from Cory Gardner.

Looking back on the past decade, we have to wonder what America would look like if the conservative Republican Party had decided the economic health of the nation was more important than a hypothetical election strategy. The 2009 recession might have been shorter and less traumatic for a generation of our fellow citizens.

Although the 2008 global economic crisis did not result from a pandemic disease outbreak, the situation was by far the worst economic crisis faced by the United States since the Great Depression, and it happened before Barack Obama became President. The choice by Republicans to lock down against anything that would reduce the impact of the ensuing Great Recession was a political choice, meant to harm Obama and Democrats politically by–and there’s no nice way to say this–allowing the whole country to suffer.

Today, only the most hardcore elements of the conservative fringe–and Rep. Ken Buck, of course–oppose economic stimulus to hold the country together during the COVID-19 pandemic. The same Sen. Cory Gardner who slammed the “failed stimulus” at every turn when he ran for Congress in 2010 only has the problem now of not having enough money to hand out–complaining bitterly about the depletion of Paycheck Protection Program funds and voting for every stimulus bill he’s been presented with.

What’s different today, of course, is that the well-heeled political consultant agitators who would otherwise be rallying the grassroots right into the streets to fight against the “bailout” stimulus bills have the public health orders to stay at home to exploit instead. President Trump’s chaotic management of the pandemic–first downplaying it for crucial weeks, then pretending to take it seriously, then starting to actually take it seriously while laughably claiming he had always taken it seriously, building false hope with unsupported claims about various treatments, and the latest bizarre step of encouraging protests against the very same governors he claims every day to be “working with” to control the spread–has sent his supporters into a low-information frenzy of misguided rage.

Sounds awfully familiar, doesn’t it? But this time, the consequences could be much more direct. 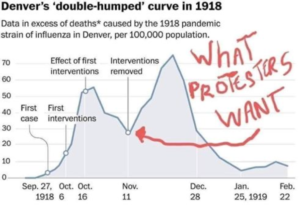 The protesters headed to downtown Denver today understand even less about the COVID-19 pandemic than they did about the American Recovery and Reinvestment Act of 2009, let alone the Affordable Care Act of 2010–which they would believe for the ensuing decade was killing Americans instead of driving the rate of uninsured to historic record lows. The polls say overwhelmingly that the “COVID Resistance” does not represent anything close to a majority of Americans. It’s a great relief to see that Americans in every poll are much more concerned about the harm that could result from prematurely lifting stay-at-home orders than any other factor. The economic stimulus necessary to offset the inevitable economic damage from Americans staying at home is far from concluded, and is likely to increasingly divide conservatives going forward–remembering, as they surely must, what they said about economic stimulus in 2009.

In the meantime? These are the same fringe folks who thought Obamacare would kill them.

Judged by their behavior today, COVID-19 could well kill some of them.

And that would be a tragic way to learn a lesson ten years coming.