Welcome to “The Coronavirus Election”

With the lack of a coordinated national strategy for dealing with the coronavirus outbreak, news outlets across the country have been focusing heavily on the languid response from the Trump administration and the “every state for itself” dynamic that has emerged from the federal government’s ineptitude.

Here in Colorado, Republicans in leadership positions — including State GOP Chair/Congressman Ken Buck, House Minority Leader Patrick Neville and Senate Minority Leader Chris Holbert — have busied themselves by questioning decisions made by Gov. Jared Polis, local health officials, or Congress in general. In states, counties, and congressional districts where elected officials have acted quickly to combat the coronavirus spread, communities are weathering the storm much better than in places where leaders — often Republicans — have dithered. 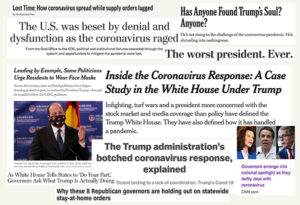 As Politico explained over the weekend, coronavirus is now the top election issue of 2020, and with that understanding comes serious electoral consequences:

What remains on the air has adapted to the new reality of American life. High-spending issue groups on the left are slamming Trump for missing the mark on his virus response. Priorities USA has budgeted more than $6 million to run anti-Trump TV and digital ads related to the virus in battleground states. Unite the Country is touting Biden as a steady-handed leader necessary in a time of crisis.

With the obvious caveat that there is still a lot of time to go until Election Day, it would be tough to argue that Republicans are not in trouble thanks to the actions of many of their leaders. A majority of Americans now disapprove of President Trump’s coronavirus response after a brief jump for Trump early in the crisis.

As Greg Sargent writes for The Washington Post, any comparison between President Trump and likely Democratic Presidential nominee Joe Biden comes out clearly in Biden’s favor:

We’re now learning that President Trump’s efforts to promote an anti-malarial drug for use against the coronavirus is causing internal administration tensions. Anthony Fauci, the administration’s own leading expert, privately challenged this optimism about hydroxychloroquine, and fittingly, Trump prevented Fauci from publicly reiterating this skepticism at Sunday’s briefing.

Only hours earlier, Joe Biden presented a striking contrast. On ABC’s “This Week,” Biden called on Trump to exercise the Defense Production Act to marshal the private sector to speed lifesaving equipment to hospitals, urged stricter social distancing and reiterated the need to “follow the science” and “listen to the experts.”

It’s now clear that this stark contrast could define the 2020 campaign. Democrats are unveiling new ads highlighting Trump’s serial failures to take the coronavirus seriously. Meanwhile, the Trump campaign is urging surrogates to claim, laughably, that Trump is “leading the nation” in the “war against coronavirus,” and to cast the former vice president as “the opposition in that war.” [Pols emphasis]

We wouldn’t want to be in charge of trying to make this message work when there are SO MANY terrible Trump quotes on the pandemic — many of which Americans have already seen and heard repeatedly.

Here in Colorado, Republicans don’t have a lot of positive news to share about coronavirus response efforts. It’s fair to say that Rep. Ken Buck (R-Greeley) will be favored to win re-election in his heavily-Republican district, an advantage also enjoyed by fellow Congressmen Scott Tipton (R-Cortez) and Doug Lamborn (R-Colorado Springs). But if any of these races tighten, the incumbents don’t have much to talk about other than their efforts to blame China for the coronavirus. Unlike Buck, Lamborn, and Tipton, Senator Cory Gardner (R-Yuma) hasn’t completely buried his head in the sand, but backing the largest government spending bill in congressional history doesn’t jibe with his long, vocal opposition to any form of stimulus spending and will be hard to explain to whatever base of support he still maintains.

As for local elected officials, their flighty contrarianism won’t age well. As we wrote last month:

…once again Colorado Republicans have positioned themselves as a brand on the wrong side of the issue dominating the headlines and impacting the lives of every Colorado voter. In a state already becoming more hostile to Republicans at the ballot box in every election, branding themselves as the “COVID resistance” party as a way of contrasting with our state’s Democratic majority government seems extremely ill-advised…

…Republicans are inviting a backlash from voters in November that could be truly historic.

The coronavirus outbreak is one of those history-defining moments that people will never forget. The 2020 election will proceed accordingly.