BREAKING: “Out of an abundance of caution from the coronavirus outbreak, the president has decided to cancel his upcoming events in Colorado and Nevada,” White House’s Stephanie Grisham says. https://t.co/NxRmDGCcec 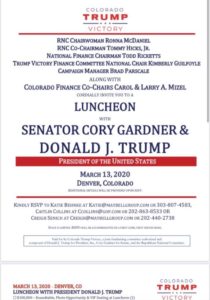 Revisiting the Denver Post’s report from last week, which seems like ages ago:

President Donald Trump will take part in a high-dollar Denver fundraiser with U.S. Sen. Cory Gardner next Friday, according to an invitation for the event.

A donation of $100,000 to Colorado Trump Victory — a joint fundraising committee for Trump, Gardner and the Republican National Committee — buys a table for two at the luncheon fundraiser, along with a photo opportunity. The location of the Denver event has not been made public.

A spokesperson for the Yuma Republican, who spoke at a rally with Trump in Colorado Springs last month, confirmed an invitation obtained by The Denver Post is for the event. The president’s campaign and a Republican National Committee spokesman did not respond to requests for comment.

Hosted by Colorado Republican demi-megadonor Larry Mizel, who apparently still doesn’t want to talk about how President Donald Trump’s presidency has correlated with a dramatic spike in the anti-Semitic hate crimes Mizel claims to revile, this high-dollar insider luncheon was supposed to be another celebration of the close relationship Trump has forged with Colorado Sen. Cory Gardner in recent months. No matter how unpopular Trump may be in Colorado, Gardner has decided that standing by his man will serve him better than going his own way.

Instead, it could be an example of Trump’s limitless hubris–the kind that keeps him gladhanding with the public when we’re all supposed to be learning the fine art of “social distancing.” Events are being called off and postponed right and left as the coronavirus crisis grips the nation–so we’ll watch and see if this fundraising visit goes forward or turns into a nice, sanitary conference call.