Get More Smarter on Monday (February 3)

It’s cold, wet, and icy today — please be careful out there, and don’t put stock in weather forecasts from rodents. It’s time to Get More Smarter. If you think we missed something important, please include the link in the comments below (here’s a good example). If you are more of an audio/visual learner, check out The Get More Smarter Show or The Get More Smarter Podcast. And don’t forget to find us on Facebook and Twitter.

► Closing arguments are being made today in the Senate impeachment trial of President Trump, though acquittal appears to be a foregone conclusion — nevermind a new NBC News/Wall St. Journal poll showing that most Americans believe Trump abused his power and obstructed Congress. On Friday, Republican Senators blocked efforts to add new witnesses or documents to the impeachment inquiry, effectively ending any hope of a real trial in the Senate.

The Aurora Democrat spoke first Monday morning as the seven impeachment managers made their final case to the Senate and the American people. He quoted from the nation’s Founding Fathers and former giants of the Senate, such as Daniel Webster, as he urged senators to do what they almost certainly will not do: convict the president and remove him from office. [Pols emphasis]

“I submit to you, on behalf of the House of Representatives, that your duty demands you convict President Trump,” Crow said. “I don’t pretend this is an easy process. It’s not designed to be easy. It shouldn’t be easy to impeach or convict a president. Impeachment is an extraordinary remedy, a tool only to be used in rare instances of grave misconduct, but it is in the Constitution for a reason.

You can watch Rep. Crow’s entire closing argument below:

► Meanwhile, Colorado Sen. Cory Gardner (R-Yuma) is still getting a lot of impeachment-related attention…but not in a good way. #CoverUpCory has become a national trend.

The editorial board of The Aurora Sentinel calls out Gardner and his fellow Republicans for their cowardice on impeachment:

America can add Jan. 31, 2020 to the list of the nation’s most appalling blunders.

Defying their sworn duty, overwhelming public opinion and decency, the Republican Party on that day succumbed to fear and corruption in the impeachment case against President Donald Trump.

Friday became historical as the day Senate Republicans refused to seek the truth about just how far the president had gone in blackmailing Ukranian officials, forcing them to undermine Trump’s political opponent…

…Republicans, and the entire nation know full well that a tsunami of truth and facts will eventually wash away Trump’s deceptions and obfuscations. Cowardly members of Trump’s own party, however,  prevented those revelations now.

Instead, Jan. 31, 2020 was the day Senate Republicans like Colorado Sen. Cory Gardner shrank in fear and colluded in the scheme to hide Trump’s crimes from the American public. [Pols emphasis]

► It’s caucus day in Iowa. Readers of Colorado Pols will tell you who is going to win tonight. The Washington Post takes a look at how the ghost of Hillary Clinton still haunts Democrats in Iowa. Here’s a primer on the Iowa caucuses and how they will be different than they were in 2016. 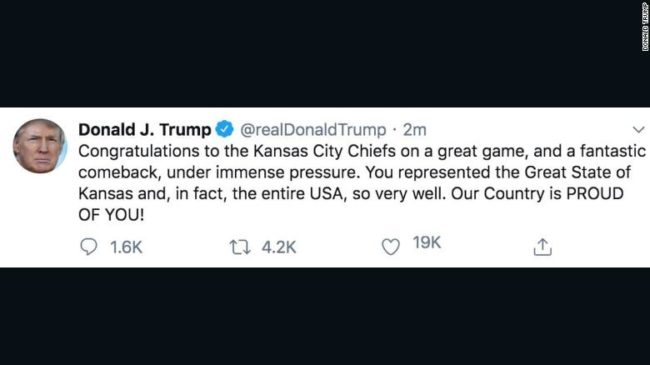 Over at CNN, Chris Cillizza explains why mixing up Kansas and Missouri is not just a silly mistake:

But presidents — and presidential candidates — occasionally make these mistakes. Everyone remembers that in May 2008 then-Illinois Sen. Barack Obama said this: “It is wonderful to be back in Oregon. Over the last 15 months, we’ve traveled to every corner of the United States. I’ve now been in 57 states.”

So, it happens. But here’s why Trump doesn’t get a pass. Because he and his administration have made a HUGE point of picking out the slip-ups of past politicians and questioning people over their supposed lack of knowledge of geography.

In 2018, Trump actually tweeted about the “57 states” flub. “When President Obama said that he has been to ’57 States,’ very little mention in Fake News Media,’ wrote Trump. “Can you imagine if I said that…story of the year!”

Before that, he made questioning Hillary Clinton’s mental fitness a regular part of his stump speech on the 2016 campaign trail.

Of course, there is also the recent case of Secretary of State Mike Pompeo trying to embarrass a reporter from NPR by suggesting that she couldn’t find Ukraine on a map (she could, as it turned out).

It is also entirely possible that President Trump is actually not aware that Kansas City is the largest city in the state of Missouri; we’re talking about the same guy who suggested building a border wall between Colorado and New Mexico just a couple of months ago.

Democrat Andrew Romanoff reported raising just $313,000 in Q4, which would be a decent number if he were running for a seat in the House of Representatives but isn’t even enough to cover his quarterly expenses for a U.S. Senate campaign.

► The issue of allowing legal marijuana businesses to access banking services has gotten tied up in Congress (surprise!), so Colorado is trying to plow ahead on its own. As Jesse Paul writes for The Colorado Sun:

There are already a handful of banks in Colorado working with marijuana businesses, including Partner Colorado Credit Union in Arvada, where Gov. Jared Polis on Monday unveiled a roadmap to increase the number of financial institutions offering their services to the cannabis industry by 20% in the coming months.

Polis is ordering his administration to identify opportunities for state legislative and regulatory clarity for state-chartered financial institutions, state-licensed money transmitters and state-regulated insurance companies. The idea is to create a path for more bank-cannabis businesses relationships.

Senator Cory Gardner (R-Yuma) has paid lip service to the idea of getting marijuana banking changes through the U.S. Senate but hasn’t been able to actually accomplish anything.

► Jim Polsfut, a former Democratic candidate for State Treasurer, is the CEO and co-founder of a new company helping to outsource medical procedures to Mexico in order to avoid the absurd out-of-pocket expenses that Americans must deal with even if they have health insurance.

► One person was killed and five others injured in a shooting on a Greyhound bus in California.

► As Politico reports, the Department of Agriculture under President Trump is making significant changes to critical programs — without even really understanding the impact it may have:

In a rare bipartisan move last June, Republicans and Democrats teamed up to scuttle an Agriculture Department proposal that would have shuttered job training centers for at-risk youth across the country — an idea that blindsided lawmakers and seemed to lack much explanation or underlying data.

Rep. Dan Newhouse blasted Secretary Sonny Perdue’s plan, which he said would close some of the highest-performing facilities in the popular program, contrary to USDA’s claims. “It appears the administration’s rollout of this proposal was done carelessly — and without the data or the statistics to point to any rhyme or reason as to how the decisions were made,” the Washington Republican said at a committee hearing.

Perdue called off the site closures soon after. But the hasty rollout and bipartisan backlash pointed to a problem that has repeatedly dogged the department: Many of USDA’s recent actions have been marred by missing pieces of critical data, assertions challenged by outside experts or other struggles to demonstrate the reasons for major shifts in federal food and farm policy.

The trend has raised questions from critics about how USDA leaders are making decisions with huge implications for struggling farmers, food stamp recipients and workers in dangerous meatpacking jobs, among other aspects of America’s food system.

“They operate much more on anecdote and ideology than facts and data,” said Rep. Chellie Pingree (D-Maine), a member of the House Agriculture Committee.

► Try reading this quote from a Colorado Public Radio report without laughing out loud:

“Nothing is more important to Sen. Gardner than providing the best constituent service possible to all Coloradans,” said spokesperson Annalyse Keller.

Gardner hasn’t held a town hall meeting in Colorado in more than two years, and it is well-known that trying to get a thoughtful response from Gardner’s office — on any topic — is nearly impossible.

► Congressman Joe Neguse (D-Lafayette) is bringing a special guest to Tuesday’s “State of the Union” address: Tom Mauser, whose son Daniel Mauser was among those killed in the 1999 massacre at Columbine High School.

Meanwhile, Rep. Neguse is criticizing the Trump administration for a decision to curb immigration from Eritrea; Neguse’s parents immigrated from Eritrea during that country’s bloody war with Ethiopia in the late 1990s.

► The Army Corps of Engineers broke ground on a new Colorado facility that will house the newest branch of the military: The Space Force!

► Democratic Presidential candidate Michael Bloomberg is buying LoDo (some of it, anyway).

Sen. Lindsey Graham (R-S.C.) told Fox News on Sunday that the Ukraine whistleblower will be called before the Senate Intelligence Committee after the impeachment trial because “I want to find out how all this crap started.”

Graham is also threatening to go after former Vice President Joe Biden and his son Hunter when the trial is over, even though Donald Trump’s impeachment defense team failed to demonstrate a single ethics violation or crime by either man.

As for the whistleblower, who is protected from retaliation by federal law, Graham told Fox host Maria Bartiromo: “The Senate Intel Committee under [Sen.] Richard Burr (R-N.C.) has told us that we will call the whistleblower. Why is it important? I want to find out how all this crap started.”

Well, you know, there’s been this little trial happening in the U.S. Senate that could answer a lot of these questions…