A Tale Of Two Auroras 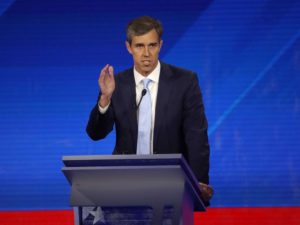 Two of the most contentious national political issues passed in the night in the last 24 hours in Aurora, Colorado. First, Democratic presidential candidate Beto O’Rourke held a town hall event yesterday evening just a short distance from the movie theater where a mass shooting in 2012 helped change the debate over gun control in Colorado.

The politics of gun control in Colorado have evolved from the intense pro-gun pushback against the 2013 Colorado gun safety laws to the present, where Colorado serves as a model for nationwide legislation being considered in response to mass shootings that have continued and worsened across the nation since the Aurora theater shooting.

As the Denver Post’s Jon Murray reports, Beto made his point and a smattering of open-carrying gun activists made theirs:

Beto O’Rourke repeated his recent call to round up high-powered assault-style weapons and pushed for stronger gun-control measures Thursday during an outdoor town hall in this Denver suburb, but rarely has his attention to the issue resonated so deeply in a crowd…

“I am here to say: Hell, no, you’re not,” Lauren Boebert said to scattered jeers.

She’d driven three hours from Rifle on the Western Slope to deliver that message. She owns a restaurant called Shooters Grill, where the wait staff packs heat, and her Glock handgun was holstered at her side Thursday. Boebert, 32, pressed O’Rourke to explain “how you intend to legislate the hearts of men and leave American citizens like myself” defenseless.

We’re relieved to report that although a number of people did show up carrying weapons there was no significant confrontation and no violence at O’Rourke’s town hall. Although no one expects O’Rourke to move into the top tier of Democratic candidates, he’s getting a lot of credit from frustrated gun control advocates for taking a bold stand that could help break the gun lobby’s logjam in Washington. O’Rourke also deftly handled disingenuous questions from Evan Todd of Rocky Mountain Gun Owners about banning all semiautomatic weapons, which is beyond the scope of O’Rourke’s proposal.

The backdrop of Aurora, with its history of tragedy as a model of hope for meaningful progress nationwide on the issue after Colorado took action in 2013, served O’Rourke and his message very well. But then the second act of Aurora’s busy night got underway–and things went, as they say, sideways from there. Colorado Public Radio:

Protesters marched on the Aurora home of the man who oversees a private immigration detention center Thursday night.

Previous protests have focused on the facility itself in suburban Aurora, which is run by the GEO-group and contracted to Immigration and Customs Enforcement. Demonstrators carried signs equating the detention center to a concentration camp and called for the abolition of ICE.

The Aurora Police department said three males were arrested and will be charged with obstruction, disorderly conduct and resisting arrest.

Marchers were met by counter-protesters in support of ICE — and police in riot gear. Aurora Police officers make a line in the street to keep demonstrators separate from the home of Johnny Choate, GEO Group’s head of the facility. In a statement, GEO called the protest a “spectacle” that “has set a new low in our politics and public discourse.”

Last night’s protest outside the residence of the warden of the Aurora contract ICE detention center was carried out by radicals under the auspices of a group calling itself Denver Communists. Ahead of the incident the American Civil Liberties Union (ACLU), which put out a scathing report on conditions inside the facility this week as well as Rep. Jason Crow, who has been very critical of operations at the facility since his election last November, both put out statements condemning the protest as counterproductive to the goal of actually improving conditions there:

The ACLU just this week released a report critical of conditions inside the detention facility. The organization wrote of deficiencies and even deaths of those who had been in here. But as far as protesting at the ICE processing center head’s home… no way.

Maes sent a letter to the processing center administration official Johnny Choate that stated, “I do want you to know that the ACLU is in no way supportive of this protest and we certainly are not encouraging it or supporting it in any way.”

…Congressman Jason Crow, a Democrat representing District 6, disagrees with the protestors’ tactic. He released a statement that read, “We need more oversight of ICE facilities, not the protest of individuals at their private home.”

The conduct of the protesters in a private neighborhood, and the imagery of Aurora SWAT team members guarding the porch of a middle-class suburban home, can only be considered horrendously detrimental to the cause that ostensibly motivated the protest–a cause which is shared by a large percentage of Americans who are sickened by the Trump administration’s punitive handling of immigrants seeking asylum at the border. It’s another case of self-harm done in the pursuit of good, and the propaganda victory this kind of hooliganism hands Trump and his supporters outweighs any possible benefit.

This will be evident in the coming weeks as the ugliest moments of last night’s protest are replayed on continuous loop by FOX News and conservative media.

To summarize, last night in Aurora did not witness the final word on either of these two issues, which are among the most contentious and emotional of anything we debate in American politics today.

One event helped illuminate an issue; the other did not. And the debate will continue.