As we reported earlier this week, Democratic presidential candidate Beto O’Rourke, who has emerged as a strong advocate for gun control on the campaign trail after a deadly shooting in O’Rourke’s hometown of El Paso earlier this summer, will hold a town hall meeting tonight in Aurora. The event is being held inside the Aurora Municipal Center on East Alameda beginning at 5PM. If you’d like to attend you can RSVP here.

We are obliged to inform you, however, that protesters from the state’s hard-right gun rights group Rocky Mountain Gun Owners (RMGO) are expected to be out in force near the event: 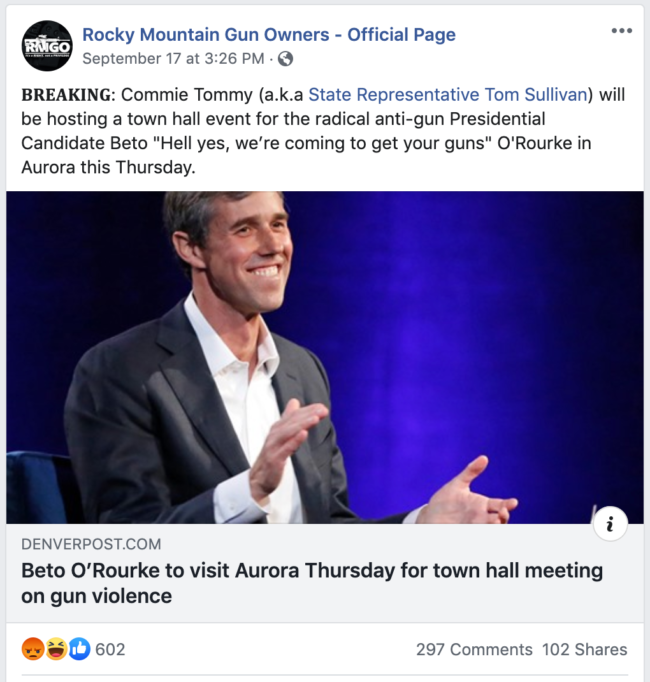 Even many locals may not realize this since so many public rallies are in the City and County of Denver, but in Colorado open carrying of firearms is generally allowed outside the boundaries of Colorado’s largest city. O’Rourke’s increasingly blunt campaign promises to remove AR-15 and AK-47 type assault weapons from civilian ownership through a mandatory buyback are exactly what Dudley Brown and his “no compromise” gun rights supporters say they fear most, and there is a scenario in which a substantial number of RMGO supporters descend on this town hall openly carrying assault weapons that make them visually indistinguishable from a mass shooter arriving to kill people.

Our purpose here is not to frighten anyone away from tonight’s event. But if you’re going, you do need to be aware of what you may find outside. We of course hope that everyone present, armed and not, conducts themselves “respectfully and responsibly.” But even in the absence of something terrible, and we hope we see in tomorrow’s news that nothing terrible happened, openly carrying assault weapons in a town with Aurora’s history, to intimidate people after this summer of deadly mass shootings across the nation, is a sickening affront all by itself.

Politically, we can only hope it will backfire like most of RMGO’s self-immolating ideas.