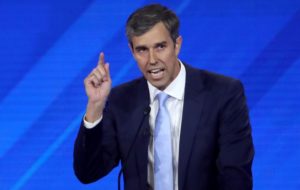 A quick note from CBS4 Denver, Democratic presidential candidate Beto O’Rourke is coming to Aurora later this week for a town hall focused on reducing gun violence–an  issue O’Rourke has taken a commanding lead on since the recent mass shooting in his hometown of El Paso, Texas, breathing some renewed life into what was a flagging campaign:

On the heels of his Democratic debate appearance, presidential candidate Beto O’Rourke will hold a town hall in Aurora Thursday. He’ll listen to community members about the impact of gun violence.

O’Rourke has repeatedly called for immediate action on gun control. One of his proposed plans is a mandatory assault weapon buyback program. He’ll be introduced by Colorado State Representative Tom Sullivan, who lost his son in the 2012 Aurora Theater Shooting.

Though we can’t say much for poll movement, O’Rourke is getting a lot of moral credit in the past few weeks for nudging the “Overton window” on guns toward greater protection–with his unapologetic call for an Australia-style mandatory assault weapons buyback to meaningfully reduce the number of such weapons in civilian circulation. That’s well to the left of the “mainstream” Democratic Party platform, which calls for the reinstatement of the 1994 assault weapons sales ban. But gun safety advocates tell us it’s a refreshing shot of courage that could help make something like a renewed assault weapons ban a reality.

And of course, to the gun lobby Beto is now the second coming of [insert historical bogeyman here].

Love him or hate him, Thursday Colorado gets our chance to see Beto in action.