Get More Smarter on Tuesday (September 17)

Today is Constitution Day, which is apparently a thing; please celebrate responsibly. Now, let’s Get More Smarter. If you think we missed something important, please include the link in the comments below (here’s a good example). If you are more of an audio/visual learner, check out The Get More Smarter Show or The Get More Smarter Podcast. And don’t forget to find us Facebook and Twitter.

► Former President Teddy Roosevelt was known for his “big stick diplomacy” when it came to foreign policy. Surely you remember the quotation: “Speak softly and carry a big stick.”

President Trump’s philosophy is a little different; it’s more like, “Yell loudly and make occasional references to the size of your stick.” As the Washington Post reports:

President Trump has said Iran is the greatest threat in the Middle East, a would-be nuclear power that he has brought low through the stiffest sanctions ever applied to a single nation. He has warned that the United States is “locked and loaded” to punish Iran if it is found to be responsible for the attack on Saudi oil facilities over the weekend.

But Trump has also eagerly courted a sit-down negotiation with the leader of Iran, called off a military strike earlier this year because it could have killed too many Iranians and flirted with a plan to offer Tehran a $15 billion lifeline to help it deal with the crushing U.S. sanctions.

On Monday in the Oval Office, Trump told reporters “we don’t want war with anybody” and then less than an hour later said he thinks a U.S. military strike on an Iranian oil facility would be a proportional response.

On Tuesday, Iran’s Supreme Leader appeared to rule out direct negotiations with the United States. From a separate Washington Post story:

U.S. officials rejected claims by Houthi rebels in Yemen, who receive Iranian support, that they had launched the strikes Saturday. The officials described the attacks as more sophisticated and powerful than anything the rebels could accomplish on their own.

…Trump’s reluctance to assign blame appeared to reflect his long-standing desire to keep the United States out of wars, despite his tweet Sunday that the United States was “locked and loaded depending on verification.”

“I’m not looking to get into new conflict, but sometimes you have to,” Trump said Monday.

Trump did not rule out a military response but made clear that the Saudis would take the lead — and pay the bill.

Oh, good. The Saudis will pay the bill — just as soon as the check clears from Mexico to pay for a border wall.

► Former Trump campaign manager and aspiring U.S. Senate candidate Corey Lewandowski is testifying today before the House Judiciary Committee. According to a report from Reuters, Lewandowski was “excited” to be able to defend Trump in a public setting. With any luck, Colorado Congressman Ken Buck (R-Greeley) will again unintentionally create new problems for the White House.

► Mutherf***in’ Beto O’Rourke is coming to Colorado on Thursday.

► Congressman Ed Perlmutter (D-Jefferson County) held his 100th “Government in the Grocery” event last weekend. This is what elected officials are supposed to be doing.

If the case against Trump’s corruption were so weak, then why would Trump and the White House have to go to such extraordinary lengths to stonewall Congress’ ability to exercise its most basic and fundamental oversight authority?

This juxtaposition will be on full display on Tuesday afternoon, when former Trump campaign manager Corey Lewandowski testifies to the Judiciary Committee. The White House has placed sharp limits on what Lewandowski can discuss, ordering him to discuss only what’s in the Mueller report, and not to discuss any private communications that go beyond this.

In all three cases, the White House’s arguments are absurd. The White House is claiming that Congress’ subpoena power is null and void because Dearborn and Porter have absolute immunity from testifying.

► Colorado has another Democratic candidate for U.S. Senate, so that’s neat.

► The National Park Service says that a border wall at the Mexico border will destroy important archeological sites.

► Colorado is doing some good work on helping immigrants, as the Denver Post explains:

Colorado’s Refugee Services Program is ranked among the highest in the country in employment measures related to immigrants and refugee resettlement state agencies, according to a 2019 report from the federal Administration for Children and Families.

Although Colorado isn’t the best in connecting job seekers to employment nor does it offer the highest wages, the state’s overall rank in all outcome measures is still high, said Kit Taintor, state refugee coordinator.

The state office works with its partners to improve upon connecting prospective employees to jobs that grant them economic security, especially as costs of living continue to rise. Officials also want to increase the number of jobs employees take that have opportunities to move up or provide training for better jobs in the future.

Elsewhere, the Aurora Sentinel reports on efforts by Immigrations and Customs Enforcement to dispel “myths” about the treatment of immigrants in U.S. custody.

Meanwhile, 9News explains why Colorado is not part of a multi-state settlement with Purdue Pharmaceuticals over their role in the opioid crisis.

► Colorado is the first state to ban QR codes for the purposes of counting ballots.

► The White House is intervening in an auto workers strike in what appears to be an obvious ploy to attract voters to a Trump re-election campaign. As Politico reports:

The White House is seeking to end the United Auto Workers strike against General Motors with an agreement that would reopen an assembly plant in Lordstown, Ohio that GM shut down in March.

The effort, described to POLITICO by two people close to the matter, would effectively put the White House on the side of the UAW. Some 48,000 GM workers went out on strike Monday demanding higher wages, more generous health care benefits and more job security than management has been willing to offer in a new contract.

If the effort is successful, it could boost the president’s reelection chances next year in Michigan and Ohio, where his approval rating has been slipping since the two states helped him to victory in 2016. President Donald Trump has tried to woo blue-collar workers by promising a manufacturing revival, but he’s criticized union leaders and has a fraught relationship with the automakers. His Justice Department recently opened an antitrust probe into four automakers, not including GM, that are cooperating with California as it tries to bolster clear air rules.

► The Colorado Sun explains Proposition DD and how voters could add Colorado to the growing list of states legalizing sports betting.

► One of the failed Recall Polis grifting operations is shifting its tactics to focus on supporting the anti-vaxxer movement. 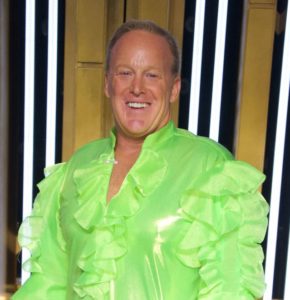 ► Former White House Press Secretary Sean Spicer made his debut on “Dancing With the Stars” in a shirt that he probably didn’t borrow from Mike Pence. As CNN’s Chris Cillizza explains, Spicer is trying to turn this money grab into some sort of culture war thingy:

“Wanna create an emotional meltdown in Hollyweird? Vote for @seanspicer to win ‘Dancing with the Stars’ tonight and every night he’s on. @seanspicer is a good guy and a brave sport to go on DWTS. Let’s show him some love!”

This is the sort of “own the libs!” stuff that Huckabee has trafficked in since Trump’s election. The elites look down on us regular folks so let’s show them a thing or two is a well-worn page in the Huckabee handbook.

But then on Tuesday morning, Spicer took it to a whole new universe. He retweeted Huckabee and added this:

“Thank you @GovMikeHuckabee Clearly the judges aren’t going to be with me. Let’s send a message to #Hollywood that those of us who stand for #Christ won’t be discounted. May God bless you”

Wait, what? So the reason that the judges didn’t like Spicer’s performance was because he “stand[s] for Christ”? How, exactly, did he draw that conclusion?  [Pols emphasis]

► Hillary and Chelsea Clinton will visit Denver in November to promote a new book.

► Would President Trump really select a #NeverTrumper to be his next National Security Adviser?