This is What Elected Officials Are Supposed to Do 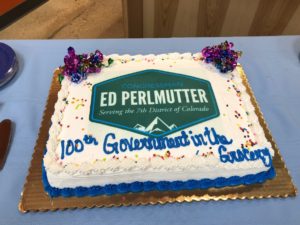 We all get tired of negative news, even if we recognize that the negative aspect of a story might be what makes that story relevant in the first place. Media outlets report on airplane crashes but never list out every flight that landed safely in a given day. “Dog Bites Man” is not a newsworthy headline because it’s not unique, but “Man Bites Dog” will get your attention every time.

It is for similar reasons that we often discuss the inexplicable inaccessibility of Colorado Sen. Cory Gardner (R-Yuma), who can be easily located in cardboard form but can be almost impossible to find in real life. It is not normal — nor should it be — for an elected official to be so completely disconnected from his or her constituents. To quote Kyle Clark of 9News:”Citizens shouldn’t have to be detectives to meet with their representatives.”

Or, to put it another way, Sen. Gardner is the “Bizarro” version of Rep. Ed Perlmutter (D-Jefferson County).

Perlmutter was first elected in CO-7 in 2006 and hasn’t lost a re-election contest ever since. In fact, Perlmutter has won every one of his re-election bids by at least a double-digit margin. There are many reasons for Perlmutter’s success, but at the top of the list is a very simple explanation: Constituent services. Perlmutter makes it easy for his constituents to find him and goes out of his way to provide assistance — which is exactly what you should expect from your elected official. 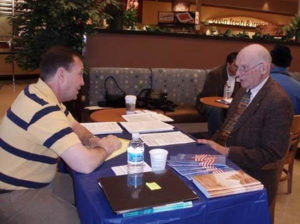 Rep. Ed Perlmutter holds a “Government in the Grocery” event in 2007.

Over the weekend, Perlmutter reached a milestone by holding his 100th “Government in the Grocery” event, in which he sets up a table at a grocery store in the district so that constituents can talk to their Congressman directly. From a press release:

Perlmutter started the Government in the Grocery program when he first took office in 2007 in order to better hear from constituents and meet them in their local community. The first Government in the Grocery was held on January 27, 2007 in Wheat Ridge. Perlmutter holds these events on a regular basis at different grocery stores in cities across the 7th Congressional District and meets with constituents one-on-one about whatever is on their mind.

“I believe being accessible and engaging often with constituents is essential to the fabric of our democracy,” said Perlmutter. “The Government in the Grocery program is an easy and convenient way for constituents to share their concerns, ideas and questions and, in turn, makes me a better representative.”

Congratulations, and kudos, to Congressman Perlmutter.