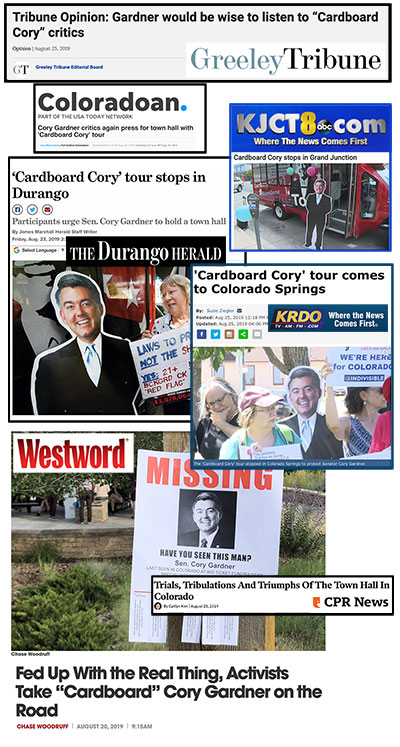 “The true measure of a man is whether or not people prefer him in cardboard form.”

Cardboard Cory might not just be the most popular cardboard cutout in modern history — it might be the most popular version of Cory Gardner in existence today. Cardboard Cory recently concluded a weeklong journey around Colorado that generated an astonishing amount of media coverage (more on that in a moment), demonstrating once again that Gardner is in a perilous position as he looks ahead to a 2020 re-election campaign.

The cardboard cutout version of Sen. Cory Gardner (R-Yuma) was birthed in 2017 by activists seeking to draw attention to the fact that the real Gardner has a troubling tendency to avoid his constituents in Colorado; in February 2017, some 1,500 people showed up to a “town hall” event featuring the recyclable senator. Cardboard Cory has since made regular appearances at political events across the state. It has flourished in part because of clever organizing and outreach but also because the real Gardner has made inaccessibility his brand. As Colorado Public Radio recently reported, “this perceived lack of accessibility has Democratic activists dogging his every step.”

Last weekend in Pueblo, Cardboard Cory came face-to-face with actual Cory, the culmination of a wildly-successful week of activism that might best be summed up by this editorial from the Greeley Tribune that plainly states, “the organizers of the “Cardboard Cory” tour make a pretty good point.”

Gardner has been largely absent during the past five years when it comes to being available for his constituents, to whom he needs to be accountable.

His own office couldn’t even recall his last appearance in a town hall-like setting. Instead, they provided the Tribune a list of events Gardner had appeared at in the past few months, most of which were private or were the sort of public appearances, like walking tours, that don’t actually give voters the kind of access the “Cardboard Cory” folks have been asking for. [Pols emphasis]

Walking tours provide a great photo opportunity, but they don’t allow constituents to directly interact with Gardner, and that’s especially true when the tour hasn’t been advertised or put on some kind of schedule to which the public has access.

That’s what the “Cardboard Cory” tour is really seeking, scheduled events at which they have direct access to their Senator. We don’t think that’s an unreasonable expectation.

The Cardboard Cory #SinceUBeenGone tour made headlines across the state in the last week, from the Ft. Collins Coloradoan and KJCT8 (ABC News) in Grand Junction, to The Durango Herald and KRDO-TV in Colorado Springs.

Nevertheless, as Shareblue Media reports, (actual) Gardner continues to insist that his constituents are his top priority:

In a campaign fundraising email, the Gardner campaign insisted “the single most important part” of Gardner’s job is to “listen to all Coloradans and what matters to them.”