Bottom line: elected officials shouldn't get credit for public events simply for appearing in public without notice. Citizens shouldn't have to be detectives to meet with their representatives. Journalists shouldn't repeat such laughable nonsense if politicians claim otherwise.

Pretty much exactly this, folks.

UPDATE: As an eagle-eyed reader points out, there are 69 total events listed in the Fox 31/KDVR story…including at least  9 duplicates and one birthday party. Here are those duplicates listed side-by-side:

And here is the “birthday party”:

How is this a “public event?” In lieu of gifts, bring policy questions! 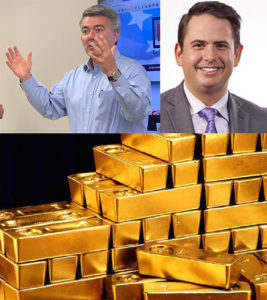 Most people fundamentally understand that they are unlikely to receive millions of dollars worth of gold in exchange for the low, low price of $1,000. Yet the Nigerian Prince/Letter scam — also known as “419” fraud or an “advance-fee scam” — remains in existence more than a decade after it first appeared because it still works often enough to be profitable. Last year alone, Americans were bilked out of at least $700,000 after responding to an unsolicited email message from a mysterious “Nigerian prince.”

Sadly, this sort of scam also works in politics from time to time. Today Joe St. George of Fox 31 News bit embarrassingly hard on a ridiculous bit of spin from the office of Sen. Cory Gardner (R-Yuma) that other news outlets have already dismissed as nonsense. Be prepared to cringe:

If you are a follower of #copolitics on social media you have likely seen the accusation that Senator Cory Gardner is hiding.

“Cardboard Cory” is a popular meme on Twitter with Democrats accusing Gardner of not taking questions from constituents.

While Gardner has not hosted a large scale townhall in Denver this year — featuring widespread publicity in advance like other GOP candidates have done over the years– Gardner is not in hiding.

A review of Senator Gardner’s schedule shows he has actually hosted more than 50 events throughout the state in August — giving the candidate for reelection in 2020 a chance to interact with thousands of Coloradoans.

Oh, boy. St. George goes on to list a full page of “events” in which Gardner supposedly appeared in public during the month of August. Team Gardner tried this exact spin with the Greeley Tribune last week but were rebuffed:

In fact, the Gardner office informed the Greeley Tribune on Tuesday afternoon the real Gardner would be in Greeley that very same day, touring a pair of food production facilities in town. The public was not invited to either event, but the newspaper was invited, without cameras, to join the senator as he toured Hungenberg Produce. [Pols emphasis]

A few days after this story appeared, the editorial board of the Greeley Tribune reaffirmed Gardner’s inaccessibility:

…it’s also true Gardner has been largely absent during the past five years when it comes to being available for his constituents, to whom he needs to be accountable.

His own office couldn’t even recall his last appearance in a town hall-like setting. Instead, they provided the Tribune a list of events Gardner had appeared at in the past few months, most of which were private or were the sort of public appearances, like walking tours, that don’t actually give voters the kind of access the “Cardboard Cory” folks have been asking for. [Pols emphasis]

Walking tours provide a great photo opportunity, but they don’t allow constituents to directly interact with Gardner, and that’s especially true when the tour hasn’t been advertised or put on some kind of schedule to which the public has access.

That’s what the “Cardboard Cory” tour is really seeking, scheduled events at which they have direct access to their Senator. We don’t think that’s an unreasonable expectation.

Team Gardner also managed to fool Shaun Boyd of CBS4 Denver into reporting about the Senator’s non-existent “town hall” events, but at least Boyd’s inaccurate mention was a throwaway line at the end of a separate story.

What is doubly weird about this blunder by St. George is that he appeared to know better. Just last week we praised St. George in this space for conducting an interview with Gardner in which he specifically asked the Senator about why he was refusing to hold public events. Now, just 10 days later, St. George is carrying a completely different message on Gardner’s behalf.