Get More Smarter on Tuesday (August 27)

Colorado could see its first snow of the season as soon as next week. Yes, it is still officially summer. Let’s Get More Smarter. If you think we missed something important, please include the link in the comments below (here’s a good example). If you are more of an audio/visual learner, check out The Get More Smarter Show or The Get More Smarter Podcast. And don’t forget to find us Facebook and Twitter.

► President Trump wrapped up his visit to the G7 summit in France with a long, rambling press conference that could easily just be a cold opener for “Saturday Night Live” by itself. This is the actual President of the United States of America at the peak of his lunacy.

► Former Congresswoman Gabrielle Giffords was in Aurora on Monday to talk about curbing gun violence. As the Denver Post reports:

“Be bold, be courageous. The nation is counting on you,” Giffords told a standing-room-only crowd of about 150 people during a town hall meeting in Aurora.

Giffords was shot and nearly assassinated in early 2011 during a constituent event in Arizona. To focus on a lengthy recovery, she retired from Congress the following year and has since become one of the nation’s leading advocates for gun control measures.

On Monday night, she hosted the town hall event with three Democratic members of Congress from Colorado — Reps. Jason Crow, Joe Neguse and Ed Perlmutter — as part of her advocacy work in the Centennial State. Attorney General Phil Weiser and several state lawmakers were also in attendance.

“The good news is, the tide is turning,” said Crow, who represents Aurora and ran for Congress on a gun control platform last year. “The majority of Americans are with us” on gun control.

Cardboard Cory — who has had a very big month already — was also in attendance on Monday: 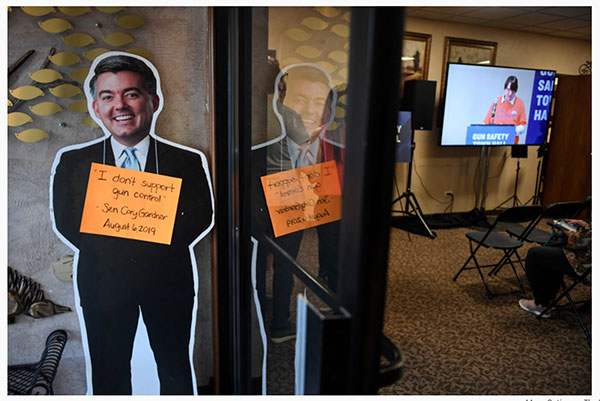 ► The latest episode of The Get More Smarter Podcast is now available for your listening pleasure. Find out more about John Hickenlooper’s Senate candidacy, Cardboard Cory’s adventures, and whether or not wearing pants will become the signature issue of 2020.

► As the Grand Junction Sentinel reports, there’s a whole lotta shady going on in Mesa County:

The silence from Mesa County officials is deafening as to why their top executive, County Administrator Frank Whidden, was placed on paid administrative leave in May and why he abruptly resigned two months later.

Despite numerous questions and three Colorado Open Records Act requests from The Daily Sentinel, the county is not disclosing why its highest paid employee, someone who received a 37% pay increase less than a year ago, was suddenly placed on paid leave for two months and then unexpectedly resigned…

…The first CORA request made by the Sentinel resulted in two copies of Whidden’s already released one- sentence resignation letter, which said he was resigning “in order to pursue other opportunities.”

The Mesa County Attorney’s Office said the newspaper’s second open records request would cost about $50,000 to comply with, while the third request of all correspondence since May between Whidden and the three county commissioners — Rose Pugliese, Scott McInnis and John Justman — produced only three emails, all of which were news articles published by the Sentinel about Whidden’s resignation and a federal age discrimination lawsuit filed against Whidden and the county.

Initially, county officials said Whidden, who could not be reached for comment, was out for medical reasons, but McInnis and Pugliese said that wasn’t the case.

► The Executive Director of the Colorado Democratic Party, Halisi Vinson, started a big email chain with county party officers to discuss John Hickenlooper’s entry into the U.S. Senate race. The back-and-forth turned into a bit of a gripe fest, which ended up getting forwarded to the Denver Post. Really great work, everyone.

► Senator Cory Gardner (R-Yuma) still does not have a proposal for protecting health care coverage for people with pre-existing medical conditions.

► Republican Steve House is leaving his job as “CEO” of the State Republican Party so that he can attempt to win the GOP nomination for Congress in CO-6. House for House!

► As Chris Cillizza writes for CNN, Republican elected officials are bailing on 2020 at a remarkable clip:

On Monday, Wisconsin Rep. Sean Duffy became the twelfth House Republican to announce he would not seek reelection in 2020, a telling indication of the struggles within the minority party in the House as it grapples with a decided lack of legislative power and the electoral uncertainties created by President Donald Trump.

Although the 2020 election is still more than 14 months away, there are already four times as many Republicans leaving the House as there are Democrats. As interesting, only two of the 12 Republicans who have announced they are either retiring at the end of their terms or, in Duffy’s case, resigning before their terms end, are leaving to run for higher office. The other 10 are simply walking away from politics entirely — at least for the next two years…

…It’s easy — but overly facile — to lump all of the Republican retirement decisions into a single explanation. Like the rest of us, members of Congress make decisions about their futures for all sorts of reasons — and very rarely for one reason alone. But when you look across the landscape of the GOP retirements to date, a few obvious observations can be made about what it’s like being a House Republican in Donald Trump’s Washington — and why there has been this spate of retirements.

► Colorado’s ski and snowboard industry is worried that President Trump’s ongoing trade wars will be a big blow to the business this season.
► Colorado has the highest rate of teen vaping in the country, and it’s a big concern for health officials. From Fox 31 Denver:

The Centers for Disease Control is now investigating 193 cases of severe lung disease related to e-cigarettes or vaping, including one in Colorado…

…The Colorado Department of Public Health and Environment says people who vape should be on the lookout for symptoms including shortness of breath or trouble breathing, chest pain, cough, fatigue, and possible fever.

The Washington Post has more on the scary effects of vaping.

► A new poll from Monmouth University shows a three-way race in the battle for the Democratic Presidential nomination between former Vice President Joe Biden and Senators Bernie Sanders and Elizabeth Warren.

► State Sen. Ray Scott (R-Grand Junction) gets his position on oil and gas issues explained to him.

► Former Republican Congressman Joe Walsh, who is mounting a Primary challenge to President Trump in 2020, has lost his spot on a conservative radio station in Colorado.

► Shortly after President Trump said that his wife, Melania Trump, had “gotten to know” North Korean dictator Kim Jong Un, the office of the First Lady clarified to media outlets that Melania has in fact NEVER MET KIM JONG UN.

► Farmers are finally starting to get fed up with President Trump, as Greg Sargent writes for the Washington Post:

There are indications that they are now getting genuinely angry over Trump’s efforts to gaslight them so shamelessly over the impact of his trade war with China.

The New York Times has a good report that fleshes out the damage that farmers are sustaining right now — and their reaction to it. China’s retaliatory tariffs are closing off the biggest export market in the world — leading to a massive drop in exports of soybeans, pork, wheat and other agricultural products.