Get More Smarter on Tuesday (August 13) 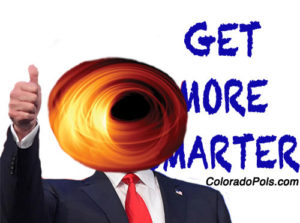 Enjoy your last day of summer vacation, Jefferson County students. Let’s Get More Smarter. If you think we missed something important, please include the link in the comments below (here’s a good example). If you are more of an audio/visual learner, check out The Get More Smarter Show or The Get More Smarter Podcast. And don’t forget to find us Facebook and Twitter.

► Eight counties in Western Colorado are among the fastest-warming places in the entire country, according to data compiled by the Washington Post:

Over the past two decades, the 2 degrees Celsius number has emerged as a critical threshold for global warming. In the 2015 Paris accord, international leaders agreed that the world should act urgently to keep the Earth’s average temperature increases “well below” 2 degrees Celsius by the year 2100 to avoid a host of catastrophic changes…

…A Washington Post analysis of more than a century of National Oceanic and Atmospheric Administration temperature data across the Lower 48 states and 3,107 counties has found that major areas are nearing or have already crossed the 2-degree Celsius mark.

Montrose, Rio Blanco, Mesa, and Ouray counties are among the Top 10 most rapidly warming counties in the United States.

► Colorado Public Radio follows up on a story we’ve been watching closely here at Colorado Pols: The real reason for moving the headquarters of the Bureau of Land Management to Colorado. From CPR:

Critics of the Trump administration’s decision to move the Bureau of Land Management headquarters to Grand Junction fear the real goal is to weaken the bureau.

These concerns and suspicions have only been heightened by recent statements and actions from administration leaders. Interior Secretary David Bernhardt appointed William Perry Pendley as acting BLM director. For years, Pendley advocated selling off the public lands of the agency he’s now leading…

…George Stone, with the Public Land Foundation, a nonprofit made up of many former BLM employees said there’s another saying in D.C.: “If you’re not at the table, you’re on the menu.”

He and many others fear BLM is the next dish to be served up, facing de-facto cuts and a marginalized position far from D.C. power players to advocate for its interests.

► A “Draft Hick” movement is the next step in what is increasingly looking like an inevitable U.S. Senate campaign for former Gov. John Hickenlooper. Recent polling indicates that Hickenlooper holds a 51-point lead over the rest of the Democratic field should he join the race for the 2020 nomination.

► As the Washington Post reports, President Trump’s 2020 re-election plan of stoking fear about legal and illegal immigrants alike may not turn out to be the best idea:

A Gallup poll released this morning shows growing support for allowing refugees from Central America into the United States. In December, 51 percent of Americans approved of accepting refugees from the countries in the Northern Triangle, which refers to Guatemala, Honduras and El Salvador. Now it’s 57 percent. Democrats remain overwhelmingly supportive – more than 8 in 10 say America’s doors should be open – but the number of Republicans who say they want to take in Central American refugees has risen from 14 percent to 24 percent. Approval among independents also increased from 52 percent in December to 58 percent today.

“Support for allowing Central American refugees entry is now higher than Gallup has found for most refugee cases it has polled on historically, including Syrian refugees in 2015 as well as stretching back to refugees from the German Holocaust in the 1930s and 40s,” said Gallup analyst Justin McCarthy. “If support for Central American refugee entry continues to increase, this could jeopardize Trump’s immigration-related initiatives.”

Meanwhile, a new Pew Research poll shows that “37 percent of Republicans want to make it easier for those who are seeking asylum from those countries to be granted legal status.” Locally, 9News reports on how Latinos in Denver are reacting to Trump’s racist rhetoric.

► Ken Cuccinelli is a dick. From CNN:

The acting director of US Citizenship and Immigration Services in a new interview revised the iconic poem on the Statue of Liberty’s pedestal to suggest that only immigrants who can “stand on their own two feet” are welcome in the United States.

Ken Cuccinelli tweaked the famous poem from Emma Lazarus — whose words, “Give me your tired, your poor, your huddled masses yearning to breathe free” are long associated with immigration to the US and the nation’s history as a haven — as part of a case for strict new measures pushed Monday by the Trump administration that could dramatically change the legal immigration system.

Why stop there, Ken?

One nation, under God,

Indivisible, with liberty and justice for all…except immigrants.

► The Trump administration is moving Christmas to December 15, as the Washington Post reports:

The White House on Tuesday said it would delay imposing tariffs on Chinese imports of cellphones, laptop computers, video game consoles, and certain types of footwear and clothing until Dec. 15, significantly later than the Sept. 1 deadline President Trump had repeatedly threatened.

The announcement, which came from the Office of the U.S. Trade Representative, ensures that Apple products and other major consumer goods would be shielded from the import tax until at least December, potentially keeping costs on these products down during the holiday shopping season…

“What we’ve done is we’ve delayed it so they won’t be relevant in the Christmas shopping season,” Trump said before boarding a flight to western Pennsylvania. “Just in case they might have an impact on people.”

► House Minority Leader Patrick Neville says he’s been “cut off” from receiving funding from a prominent Colorado business group. “Colorado Concern” might be concerned that Neville is not very good at his job.

► As Politico reports, Sen. Bernie Sanders is retooling his Presidential campaign to make his “Medicare for All” proposal the key feature of his candidacy.

► Massive renovations at Denver International Airport aren’t likely to be over anytime soon, as the Denver Post reports:

Denver International Airport has moved to terminate the $1.8 billion contract for its problem-plagued terminal renovation project, according to a source familiar with the decision and a new bond disclosure.

DIA sent a notification to Great Hall Partners overnight, the source confirmed. The airport has planned a media briefing to discuss the decision at 11 a.m. Tuesday.

The move, using a part of the public-private partnership contract that allows the airport to end the deal on its own whims, could be costly. But DIA has fought with Great Hall much of this year about the fallout from the airport’s own change orders as well as a problem with weak concrete that set back a significant portion of the project by several months.

The termination, which could take months to unfold, could lead to the hiring of new contractors to finish the project. It’s unclear what costs DIA would bear to allow for the breakup.

► A former “Never Trumper” in Colorado moves closer to drinking the Kool-Aid.

► The Colorado Republican Party might as well just announce that it fully supports efforts to recall Gov. Jared Polis.

► This is why Colorado is one of 13 states to implement background checks for gun purchases: It works.

► Recallpalooza rolls on in Pueblo. Senate President Leroy Garcia is about to be formally added to the recall list.

► The Colorado Independent talks with Douglas County Sheriff Tony Spurlock, who continues his enthusiastic support of so-called “red flag” laws despite opposition from some Republicans.

► Republican Sen. Cory Gardner always makes sure to tell constituents where he’s been — but never where he’s going to be appearing.

I’m paid for my ability to research, and I cannot find a single reference to this event anywhere. How is @SenCoryGardner representing his constituents by holding secretive, closed events that only his campaign photographer gets to document? https://t.co/WfziHfEA2J

► The latest episode of The Get More Smarter Podcast is now available for your listening pleasure. If you would rather read the transcript, here you go.