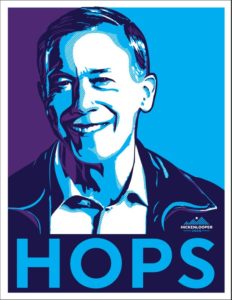 As the Denver Post’s Justin Wingerter reports, this is what a prohibitive favorite looks like:

Six hundred likely Democratic primary voters in the state were polled and 61% preferred Hickenlooper, compared to 10% for Mike Johnston and 8% for Andrew Romanoff. Fifteen percent were undecided and 6% favored Secretary of State Jena Griswold, who said Friday that she isn’t running in 2020.

“Governor Hickenlooper is personally popular among likely Democratic primary voters, with 77 percent of them saying they would have a favorable reaction if he decided to enter the Senate race,” wrote Democratic pollster Geoff Garin in a memo accompanying the poll. Nine percent of those surveyed would have an unfavorable reaction to Hickenlooper’s entry.

Garin-Hart-Yang Research Group counts among its clients the Democratic Senatorial Campaign Committee–and although Wingerter doesn’t say so explicitly it was almost certainly released with their blessing. What this poll tells us is that former Gov. John Hickenlooper remains very popular and (key point) well-known among Colorado Democrats, as well as unaffiliated voters who can now vote in Democratic primaries. Disaffection with Hickenlooper on the left side of the Democratic base doesn’t appear to be a major liability, which tells us that resentment has been siloed with hardcore activists and the general voting public simply considers Hickenlooper to be a moderate Democrat.

Numbers like these make a compelling case for Hickenlooper to enter the U.S. Senate race, and soon, in order to allow Democrats at all levels to lock in their own strategy around Hickenlooper and put an end to unproductive primary spending. Coming later than most candidates, this news is naturally not welcome to the other primary contenders–but just like Cory Gardner himself cleared his field in all but formality upon his late entry in 2014, Hickenlooper arithmetically outclasses his opposition in the Democratic Senate primary. He is better known and better equipped to mount the challenge than anyone else. If Hickenlooper declines to run, he’s not the only candidate who can beat the vulnerable incumbent–but he’s the candidate most likely to force national Republicans to conclude Cory Gardner’s seat can’t be saved.

At the end of the day, that surety is what Democrats need most.