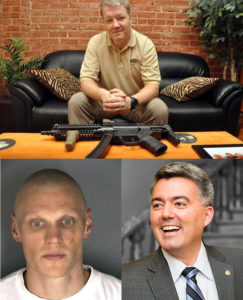 Wesley Gilreath, 29, is currently behind bars in Boulder on child pornography charges. His recent attempt to purchase a gun was rejected when a check was run.

…The background check flagged Gilreath, who was committed to a mental institution in 2016.

Maybe Wesley Gilreath was trying to purchase a gun so that he could play a real-life version of “Duck Hunt” or because he worried about keeping coyotes away from his chickens. Maybe Gilreath wanted a gun so that he could kill innocent people. We don’t know what might have happened had Gilreath gotten his hands on a firearm, but we don’t need to know that outcome to understand that background checks served their purpose here. When you argue against any sort of gun control — which Sen. Cory Gardner (R-Yuma) has done recently — you are standing up for people like Wesley Gilreath. Period.

If you are serious about preventing gun violence, then you must be serious about keeping guns out of the hands of violent people. That’s what is happening in Colorado, As Karen Morfitt reports for CBS4 Denver:

While the percentage of denials hasn’t grown significantly since moving to a universal check in 2013, the addition of private seller checks means hundreds of gun purchases were stopped that may not have been otherwise.

President Trump said on Friday that he is “confident” that Congress will pass “meaningful” legislation implementing background checks for gun purchases. Trump has also indicated support for a federal “red flag” bill similar to what we have in Colorado. When Trump says “Congress” in this context, he is talking about Senate Republicans; the Democratic-led House of Representatives passed two background check bills back in February that the Republican-controlled Senate has refused to even discuss. As the Washington Post reported last week, Senate Majority Leader Mitch McConnell “has shown no willingness to bring up the House background-checks bill, let alone call the Senate back to do so.” McConnell has since paid lip service to the idea of “red flag” legislation and/or background checks, but hardline gun groups and the Republicans they support remain opposed to any sort of common sense restrictions on firearms.

More than 90% of Americans support background checks for gun purchases, and this isn’t a new phenomenon; polls have consistently shown strong public support for background checks for years, and those numbers remain steady despite an ever-changing news cycle. Extremist groups like the Rocky Mountain Gun Owners (RMGO) insist on blanket, no-exception Second Amendment protections and threaten Primary challenges against any Republican who would dare support something like Colorado’s background check laws.

In the aftermath of mass shootings in Dayton, Ohio and El Paso, Texas, RMGO Executive Director Dudley Brown told the Denver Post that he and his national group, the National Association for Gun Rights, “will hold Trump and all other elected officials responsible for their gun control actions.”

On that we agree.