UPDATE: As 9News reports, it appears that this poll was paid for by supporters of Secretary of State Jena Griswold, so take these numbers with the appropriate grains of salt.

We finally get a chance today to see the first public polling numbers in the Democratic race for the 2020 U.S. Senate nomination and the right to challenge incumbent Sen. Cory Gardner (R-Yuma). We’ve known for some time that Gardner is about as favorable as a sunburn in Colorado, but a lack of available polling information has made it harder to gauge the relative strength of the (many) Democrats in the field.

According to a Keating-OnSight poll of likely 2020 Colorado Democratic Senate Primary voters released today, it would appear that the most likely candidate to become the Democratic nominee has yet to enter the race: 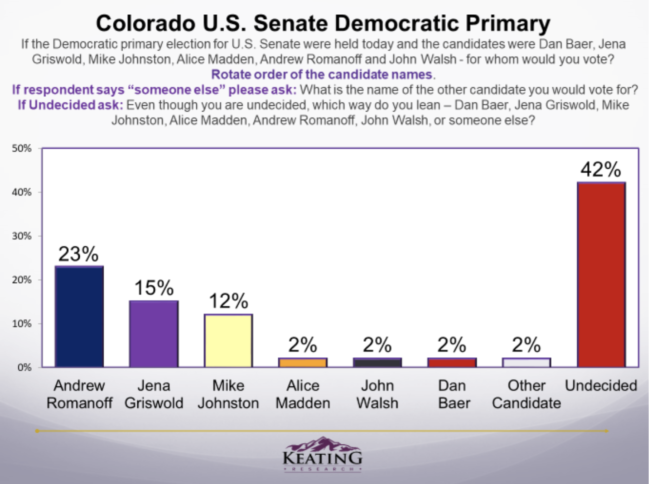 The obvious takeaway from these numbers is that the race for the Democratic Senate nomination remains virtually wide open, with 42% of respondents saying that they are “undecided” and 15% giving their preference to someone who isn’t even a declared candidate.

Colorado Secretary of State Jena Griswold was just elected in November 2018 and has not formally announced a Senate bid, yet she trails only former State House Speaker Andrew Romanoff among likely Democratic Primary voters. Romanoff’s numbers here are almost certainly attributable to name ID built up among Democrats over the last 15 years. Griswold’s unfavorable rating of just 4% suggests that her standing among potential voters is entirely related to name ID built up in 2018.

These poll results are disconcerting for candidates such as Alice Madden, Dan Baer, and John Walsh, who each only hover around the 2% mark, but it is former State Senator Mike Johnston who should be really worried. Johnston’s third-place finish in the 2018 Democratic Primary for Governor suggested that he has a solid ceiling in a statewide Primary. These Senate numbers would seem to confirm that belief.

At this time last year, Johnston was coming off a campaign in which more than $7.5 million was spent on his behalf — and he is still only polling at 12% among likely Democratic Primary voters. That’s brutal. Johnston leads the Democratic field in fundraising with $3.8 million in the bank, but that won’t dissuade other potential candidates from entering the race because Johnston will need every dime just to raise his own profile.