Of Camping and Campaign Bans

For Denver Mayoral candidate and occasional voter Jamie Giellis, the good news and the bad news are one in the same: The Denver runoff election finally concludes on Tuesday.

We’ve noted a few times in this space that Giellis is running what you could call a “nontraditional” campaign — which is a nice way of saying that she’s been a mess as a candidate. Both Giellis and incumbent Mayor Michael Hancock have ratcheted up the negative campaigning in recent weeks, though many of the wounds being suffered by the Giellis camp are self-inflicted. Take, for example, this mail piece that arrived in the mailboxes of Denver voters today: 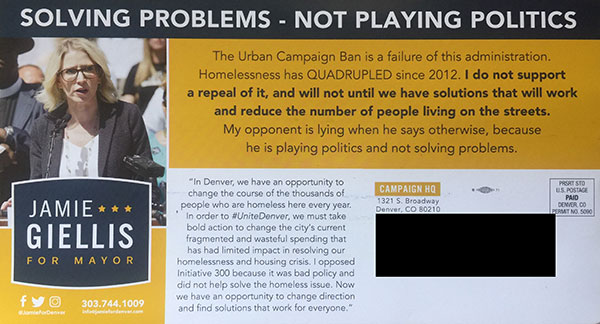 First, let’s get to the unfortunate error: An extra ‘a’ and a few other misplaced consonants drastically change the meaning of this mail piece.

I support ending the Urban Camping Ban but I do not support Initiative 300. It’s time for real solutions that actually help our homeless population. #alltogethernow #jamie4mayor #noon300 pic.twitter.com/quATMUc55L

But as you can see in the mail piece above, Giellis now says that she DOES NOT support a repeal of the Urban Camping Ban, though she stands by her opposition on the now-deceased Initiative 300. Furthermore, Giellis claims that Hancock is lying when he says that she once DID support a repeal…even though she very clearly had no problem opposing it a month ago and several news outlets (including the Denver Post and 9News) have noted that she appears to have flip-flopped on the issue.

On the other hand, you could argue that the mail piece above contradicts itself at least once on Urban Camping Bans, so who can really say what her position actually entails?

On the other (other) hand, perhaps Giellis really means to propose an Urban CAMPAIGN Ban. After this election cycle, Denver voters might agree.