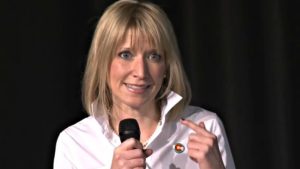 It is, oddly, not unusual to see a story about a candidate for elected office who has apparently not bothered to regularly vote in prior elections. Just last year, a Republican candidate for Governor of Oklahoma struggled to explain why he himself hadn’t voted in a single Gubernatorial election since at least 1999.

As John Ensslin reports for the publication formerly known as the Colorado Statesman, Denver Mayoral candidate Jamie Giellis hasn’t been particularly interested in her civic duty in years past:

Giellis, a candidate for Denver mayor, has not voted in 10 of the 22 municipal elections that have occurred since she moved to the city in 2006, according to a Colorado Politics review of city election records.

Giellis, a former president of the River North Arts District, voted in 12 elections during that time but missed three runoff elections, three coordinated elections, two general elections, one municipal election and one primary election, according to her voting history.

By contrast, three others considered to be in the first tier of mayoral candidates have voted in all but a handful of elections during that same period.

Missing an election here or there is not unusual, but it’s a little weird for a candidate to barely manage to cast a ballot in half of all previous elections. Incredibly, Giellis apparently didn’t even vote in the 2018 Primary Election in Colorado, even as she was considering her own bid for elected office (Giellis formally launched her campaign in November 2018). Giellis thinks that she did vote last June, but she eventually admits to Ensslin that, well, she’s not actually sure about that:

“The 2018 primary election is concerning to me,” she wrote. “During that time my husband and I were traveling for our wedding and living with my parents as we finished a home renovation, but in the midst of that chaos I recall casting a ballot that appears to have not been received. It was my job to ensure my vote was counted, and I failed at that.” [Pols emphasis]

During a Mayoral candidate forum moderated by 9News reporters Marshall Zelinger and Kyle Clark on Wednesday, Giellis got another chance to explain her spotty voting record. She failed. Miserably.

ZELINGER: Since 2011, when Mr. Hancock was elected, voter records show that you have only voted in half of the elections. I know you lived out of the country for some of that time, but if you want to lead the City of Denver, why didn’t you care enough to vote absentee?

GIELLIS: I think it’s a great question, and, you know, I was traveling abroad, in Singapore and the U.K., for most of that time, a big chunk of that time. And it’s a big task to vote while you’re abroad. And it’s my bad for not doing that…

…I didn’t realize that there was a litmus test for being willing to step up and take a leadership role in the city. [Pols emphasis]

Denver voters are receiving their mail ballots for the municipal election this week. It shouldn’t be much of a surprise if many of them don’t bother to vote for Giellis.