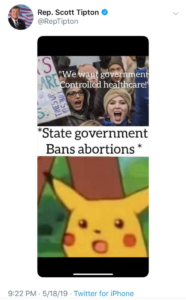 The official Twitter account for Rep. Scott Tipton (R-Cortez) posted a rather disconcerting message on Saturday mocking women in regards to recent state decisions enacting stringent anti-abortion laws. As we noted on Sunday, the Tweet in question was deleted from Tipton’s account, but not before it was captured for posterity in a screenshot.

As the Vail Daily reports in a front page story today, Tipton’s office is resorting to one of our all-time favorite bullshit excuses: The Rogue Staffer!!!

Republican U.S. Rep. Scott Tipton’s office is blaming a rogue staffer for tweeting a mocking abortion meme over the weekend deemed offensive by current and past state lawmakers who saw it and retweeted it before it was deleted a short time later…

…“The tweet was mistakenly sent out by a staffer who helps manage the account,” Tipton spokesman Matthew Atwood wrote in an email statement. “It was never viewed or vetted by Congressman Tipton prior to being posted and does not reflect Congressman Tipton’s position or work on healthcare issues.”…

…Atwood did not respond to further inquiries about disciplinary action facing the staffer. Nor did he care to expand on Tipton’s stance on the various abortion bans being passed in other states in hopes of getting the U.S. Supreme Court to overturn Roe v. Wade.

For as long as we’ve been paying attention to Colorado politics, local Republicans have been plagued by the unnamed “rogue staffer” who causes havoc wherever he or she goes. Occasionally the “rogue staffer” emerges in other states — and sometimes even the White House — but this dastardly creature tends to focus its roguish behavior on Colorado Republicans.

Someday this “rogue staffer” will be brought to justice…and then Colorado Republicans will need to find something else to blame for their awful behavior.