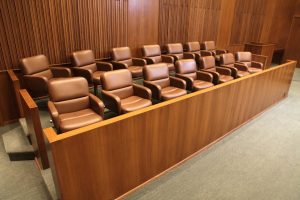 UPDATE: We’re getting our first glimpse of the invisible jury that could hear this case (as soon as they find someone to charge). Don’t forget to send in your invisible check to the Colorado Republican Party!

As the Denver Post’s Kirk Mitchell reports, following up on a story that has bedeviled the Colorado Republican Party ever since the state convention last month:

The Colorado Republican Party has filed a federal lawsuit against the unknown person officials say tapped its twitter account and wrote the controversial tweet “We did it. #Never Trump” at the culmination of its state assembly in Colorado Springs…

The lawsuit filed Monday seeks unspecified monetary damages against John Doe, the yet unidentified perpetrator who either used the Colorado Republican Committee’s computer without authorization or hacked into the committee’s Twitter account.

Party spokesman Kyle Kohli told The Denver Post Tuesday the lawsuit was intended to send a public message and clarify the party didn’t publish the post on Twitter. [Pols emphasis]

The headline of the story, “Colorado GOP sues alleged sender of ‘We did it. #NeverTrump’ tweet,” certainly makes it sound as though the party had made some kind of actual progress in identifying the Tweet’s origin. When we last reported on this story, it was to expose a considerable falsehood from Colorado GOP chairman Steve Hous

e. House had initially claimed after the Tweet was published that the party “had the IP address” of the sender, but later admitted to the Colorado Statesman’s Ernest Luning that wasn’t true.

Despite the splashy headline, it’s clear from the full story that the Colorado GOP has made no progress whatsoever in identifying the alleged “rogue” sender. It’s possible they could get a court order via this suit for Twitter to give up additional log data in their possession, but as we’ve said previously, that might not do any good since the perpetrator could have connected from any number of public networks.

And the bottom line is, the whole “scandal” is increasingly moot. Donald Trump is now the de facto Republican nominee for President, and whatever shenanigans that may or may not have taken place to corral all of Colorado’s delegates for Ted Cruz are now an historical footnote. We’re not sure what kind of monetary damages the party would even be able to recover over this quickly-deleted and disavowed Tweet, although we suppose not being in Trump’s good graces as a Republican functionary, you know, has its price.

Besides, before 2016 is over, the “Never Trump” folks may feel rather vindicated.