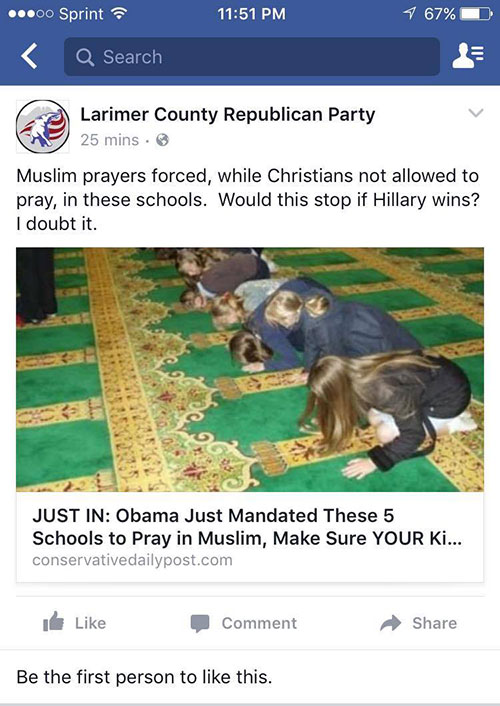 We were recently forwarded a screen shot of a post that appeared on the Facebook page of the Larimer County Republicans on Saturday warning about President Obama’s nefarious policy forcing students across the country to “Pray in Muslim.” The post is no longer available on the Larimer GOP’s Facebook page, but thanks to a sharp reader you can see it yourself right here.

The since-deleted post links to a story at something called the Conservative Daily Post titled: “JUST IN: Obama Just Mandated These 5 Schools to Pray in Muslim, Make Sure YOUR Kids Do NOT Go Here.”

Yes, it really does say “Pray in Muslim.”

According to the Conservative Daily Post “story,” five schools in five different states are now requiring students to “Pray in Muslim.” One educator is even quoted in the story almost speaking full sentences:

“When you’re separated, it’s really hard to feel like you’re a part of the community,” assistant superintendent Marsha Baisch said. “You feel different, you feel other.”

We totally understand. Nobody ever wants to feel other.

And nobody should have to be forced to “Pray in Muslim” if they would prefer to “Pray in Christian” or “Pray in Jewish.”