We were forwarded this exchange on one of the Facebook groups devoted to the logistically unlikely but still popular to speculate about campaign to recall Gov. Jared Polis from office once he is constitutionally eligible after being in office six months. Unlike the targets of opportunity in the legislature for whom the threshold of signatures needed to recall is arguably much too low, the massive requirement to gather over 600,000 valid voters signatures to qualify a recall of Gov. Polis for the ballot makes it a silly proposition–but also a guilt-free cash cow for enterprising Republican grifters.

It also has a tendency to attract, as we saw in the aftermath of another threat of violence against area schools last month, unhinged conspiracy theorists convinced that nothing is as it seems: 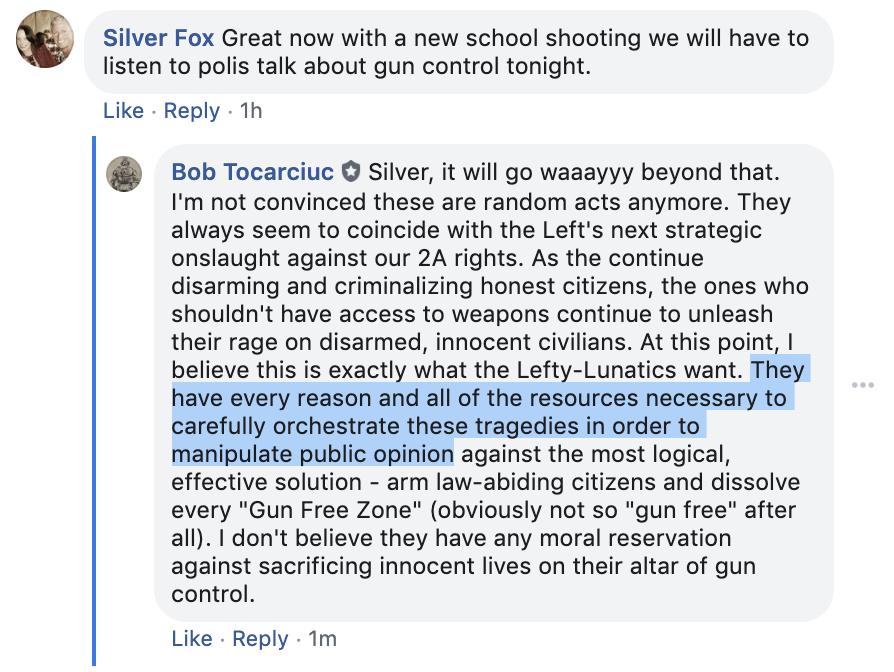 That’s Bob Tocarciuc, one of the administrators of the Resist Polis PAC Recall Facebook group operated by local political operative with ties to the Independence Institute named Tom Good–who had a falling out with a larger Recall Polis group, then helped expose nasty anti-Semitic leaders of the group in local media one of whom was later ousted.

If you Google Bob Tocarciuc, which having a last name like “Tocarciuc” makes pretty straightforward, you’ll find the KKTV news story yesterday referenced in the Facebook post about a town hall in Colorado Springs Saturday featuring the very same Gov. Jared Polis–a town hall that apparently ended in a scuffle between security and a recall supporter. In this story, Bob Tocarciuc’s role as an administrator of a recall group is curiously omitted, and he’s presented as an innocent bystander:

As the governor left, one woman pulled out a scarf that said “Recall Polis.” 11 News spoke to bystanders who watched what happened next. They say the woman was dragged over to her granddaughter, who was sitting down.

“He went from zero to complete hands-on physical, you know, submission methods,” said Bob Tocarciuc, a man who helped the woman up.

Tocaciuc also happens to be a security guard, but he was not working the event, just attending as a citizen.

“I heard screaming to my left. I was approximately 8 feet away from the lady that got assaulted, I guess. It’s the only way I can describe it,” he said.

To be clear, the incident in question didn’t directly involve Gov. Polis, but a school district security guard involved in an altercation with an attendee as Polis was leaving the town hall event Saturday evening. But it’s not really accurate to say Tocarciuc was “just attending as a citizen” either, when he’s an administrator of a group supporting Gov. Polis’ recall. This also calls into question his impartiality as a witness to the incident.

But definitely, the false flag insanity in response to yesterday’s school shooting in Highlands ranch discredits Bob Tocarciuc much more. Since it seems to be a regular occurrence based on two similar local incidents in recent weeks, we’ve been trying to understand what makes some people immediately leap to the unfounded assumption that such events must be part of a grand deception tied to contemporary politics instead of the predictable and preventable tragedies they invariably turn out to be.

For today, we can only plead with our local media to stop giving these people airtime.