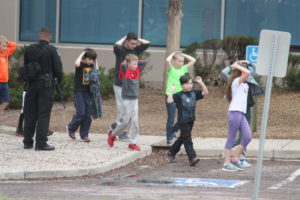 Students evacuate from a STEM school in Highlands Ranch on Tuesday.

One dead. Eight injured. Two students accused of shooting classmates at a charter school in Highlands Ranch where 1,800 children – some as young as kindergarteners – attend classes daily.

The numbers are terrifying. The pictures are heart-wrenching. The reality is undeniable.

Gun rights advocates always default to saying that this is a complicated political issue – that solving the problem requires a delicate balance between 2ndAmendment rights and protecting children from being shot in their classrooms. This is patently absurd. There can be no more “on the other hand…” rationalizing on this subject. If we can shield children from being gunned down at school, we do it. What is the point of allowing for a “well-armed militia” to protect a country that won’t even protect its own children?

As Aurora Sentinel editor Dave Perry explains in a column today, we can’t hope to curb gun violence until we get rid of the politicians who will do everything in their power to stand in the way of solutions:

…the state House legislator who represents the community where this shooting occurred has been a stalwart opponent of the red-flag and other common-sense gun control bills. GOP state Rep. Patrick Neville not only attended Columbine High School during the school shooting there 20 years ago, he is a lauded leader in the movement to arm teachers in schools, rather than pass gun control laws.

After I criticized Neville earlier this year for his moronic stance, Republican staffers in the House emailed reporters here saying no Sentinel writers would be permitted to speak with GOP House members because of my editorial views on the opinion page.

…Here’s what will happen if the Nevilles in Colorado and the nation get booted: Other Republicans and cringing pro-gun Democrats will vote with gun-control advocates because they value their seats in Congress and state legislatures more than they value gun rights. And they know it. And you know it.

As news of the shooting in Highlands Ranch was breaking on Tuesday, HOUSE MINORITY LEADER Pat Neville Tweeted the following:

Prayers for the students and families at STEM School, Highlands Ranch. Details still unfolding, one thing I do know is don’t repeat the name of the perpetrator. We need to #fixit.

This is the very same Rep. Pat Neville whose brother, Joe Neville, is the political consultant behind “Values First Colorado,” which was literally running these ads on Facebook yesterday: 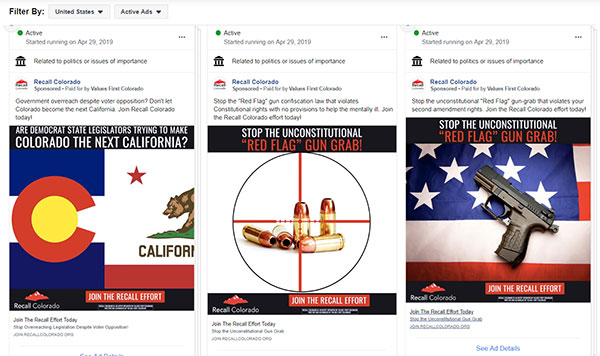 The Nevilles have long been closely aligned with Dudley Brown and his “no compromises” gun rights group Rocky Mountain Gun Owners (RMGO) – which recently filed a lawsuit attempting to overturn the “red flag” legislation and is excitedly advocating for recalls across the state. When RMGO announced their lawsuit at a press conference last week, Rep. Neville stood proudly behind the dais in solidarity. We know where Rep. Neville stands on the issue of preventing gun violence – it’s the same place he’s always stood.

Pat Neville isn’t going to do a goddamn thing to prevent gun violence in Colorado or anywhere else. He’s not the only Colorado politician who will continue to sit on his hands while innocent children are killed, but this is the guy who House Republicans have consistently chosen to lead their caucus. If we want to take real steps to curb gun violence, we must first oust the politicians who have demonstrated time and again that they have no serious interest in supporting anything that might possibly reduce the number of guns available to anyone at any time. On the federal level, this includes politicians like Sen. Cory Gardner (R-Yuma) and Rep. Ken Buck (R-Greeley), the latter of whom is now the State Republican Party Chairman.

For politicians in Colorado and the rest of the country, preventing gun violence in schools is a binary choice. Either you work to solve the problem, or you don’t. Period.

It’s time for voters to make the same choice.