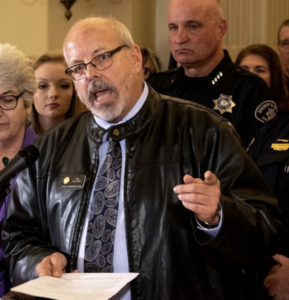 We wrote yesterday about so-called “Red Flag” gun safety legislation (also known as an “extreme risk protection order”) that is returning to the Colorado Legislature. Freshman Rep. Tom Sullivan (D-Centennial) is one of the bill’s sponsors, and on Thursday he delivered a heart-wrenching statement about his personal motivation for supporting the legislation. Sullivan’s son, Alex, was among the 12 people killed in the Aurora Theater Shooting on July 20, 2012.

You can watch Sullivan’s entire statement below via 9News. We have also provided a transcription of Sullivan’s statement, but you should really watch the video — just make sure you have a box of tissues nearby.

Not many people know how to talk to the parent of a murdered child. Certainly not one whose picture was on the front page of the newspaper, that they have all seen.

I mean, I’m wearing Alex’s jacket right now. I wear this jacket every day when I take the bus on in here. Because he’s with me. And I can feel him in me. And maybe that scares some of them.

But I’m not doing this for Alex and my family. I’m doing it for yours. Because this is as bad as you think it is. Watching your child’s body drop into the ground is as bad as it gets. And I’m going to do everything I can to make sure that none of you have to do that.