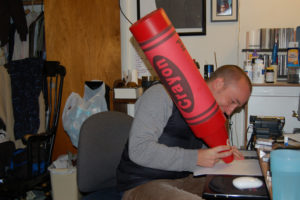 Colorado Republicans lost pretty much everything in the 2018 election. There are a lot of reasons for why the GOP was wiped out in Colorado, from terrible candidates to just flat-out incompetence (not to mention a lot of this), but the GOP’s complete and utter inability to govern remains perhaps their biggest hurdle to gaining voter trust. In the final days of the 2018 election, former Senate President Kevin Grantham highlighted this problem when he made a late appeal to voters that was basically just a list of everything that Republicans failed to accomplish with their one-seat majority in the State Senate.

If the first six weeks of 2019 are any indication, Republicans don’t appear to have learned any lessons from their shellacking at the polls last fall. The GOP spent the first month of the 2019 legislative session vomiting out absurdities and engaging in prolonged idiotic arguments. On Monday, State Sen. Jerry Sonnenberg (R-Sterling) proudly introduced a proposal for education funding that is just flat-out stupid.

Sonnenberg wants to ask voters in 2020 whether the General Assembly could take lottery dollars from the Great Outdoors Colorado fund and put them into the state’s education fund. If voters approved of the change, lawmakers in the 2021 legislative session would have the option to spend none, some or all of those outdoor dollars on public education.

Voters created the outdoors fund, which is often called GOCO, in 1992. It has spent more than $1.2 billion, according to its website. Those dollars have built 900 miles of trails, upgraded 56 playgrounds and added more than 47,000 acres into the state parks system. 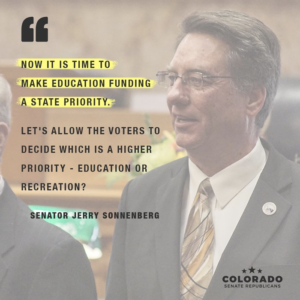 Before we get into why the logic behind this proposal is so flawed, consider the raw numbers involved. As the Post notes, GOCO picked up about $66.2 million in 2018, which is less than 1 percent of Colorado’s $7 billion education budget. This is sort of like promising to end homelessness by building an igloo.

The GOP position on Colorado’s budgetary needs in recent years has been to make completely unsupported claims that the state actually has plenty of money…but somebody is hiding it somewhere, or something. If you could make money grow on trees just by saying that money grows on trees, Colorado Republicans would make us all very rich.

When Colorado Republicans aren’t dreaming of pots of gold under rainbows, their other go-to message for budgeting has been to spin the tired old yarn about making tough financial choices just like the average person does when sitting at their kitchen table, blah, blah, blah. Former Republican gubernatorial candidate Walker Stapleton often talked about how Colorado could fix its transportation funding shortfalls (which add up to billions of dollars each year) if only C-DOT hadn’t spent $150 million on a new office space. If you’re trying to do the math at home, it looks like this: “2 + 2 = potato.”

Sonnenberg is doing something similar with his new proposal, suggesting that Colorado’s funding problems can be solved by regularly flipping a coin between two different budgetary needs. You can have parks and recreation areas, or you can have schools, but not both!

On a very literal scale, Sonnenberg’s logic could (perhaps) eventually balance a budget by suffocating half of all government programs, but this isn’t a real solution. We could probably fully fund law enforcement needs in Colorado if we stopped paying firefighters, for example, but that would be stupid.

You can’t solve Colorado’s budgetary needs with false choices or double spending, but that won’t stop Republicans from floating the same wrong answers to every fiscal question.