The Race for Governor Does Not Appear to be Tightening

Today the political prognosticators at 538.com unveiled their latest predictions about the races for Governor across the country. FiveThirtyEight’s take on Colorado’s gubernatorial battle is about as optimistic as you can get for Democrat Jared Polis: 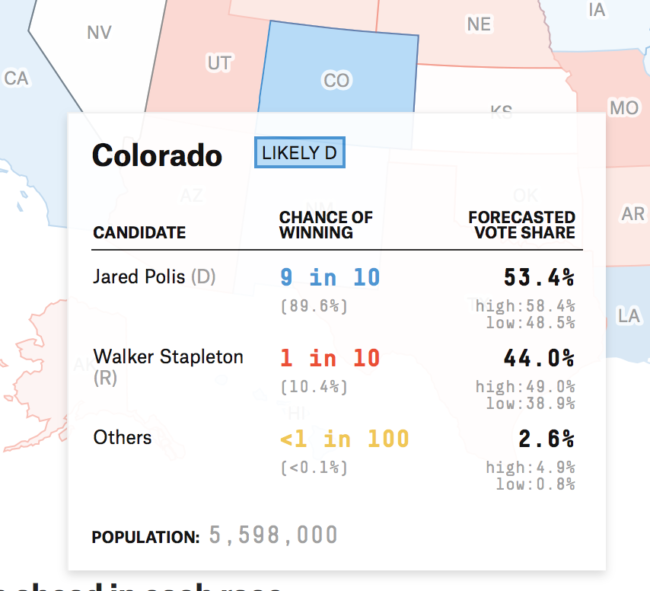 We’re not going to get into a discussion here about probabilities and likely outcomes, in part because attempting any sort of math is frightening, but we can still make some good assumptions based on everything we know with three weeks to go in the 2018 election.

According to 538.com, Polis has a 90% chance of becoming Colorado’s next Governor and projects to have a 9.4 point advantage (meaning Polis is nearly in double-digit win territory). Interestingly enough, this about what Colorado Pols readers have been predicting in numerous non-scientific queries conducted in this space. We also learned today that a new poll from Republican-aligned firm Magellan Strategies shows Polis with a 7-point lead over Republican Walker Stapleton.

We’re seeing these new numbers the same week that a shady outside group started to run ridiculously-false new television ads portraying Polis as the villain in a 1999 incident in which he was actually the victim of a crime. And finally, it was just a few weeks ago that Stapleton started airing his first big General Election television ad that was (oddly enough) 90% about Polis.

Stapleton has responded to questions about polling numbers by shrugging off the existence of all polls, which is probably what he needs to say. But candidates who believe they are in a close race do not make TV ads that are entirely about their opponent. Likewise, Stapleton supporters would not pack a television ad full of lies that are easily crushed by media outlets unless they thought that they were in a deep hole already. In short, Team Stapleton is behaving exactly how you would expect them to behave if they felt as though the race was getting away from them.

The other interesting thing to note here is that the negative attacks on Polis might not be moving the needle. The TV ad from Colorado [cough] Citizens for Truth [cough, cough] did not go on the air before Magellan began its survey of voters, but anti-Polis ads from Stapleton had been running for weeks. A Keating/Magellan poll released in early October showed Polis with the same 7-point lead we see in today’s release.

As Donald Trump reminded us all in 2016, it ain’t over until it’s over. But if you’re looking for signs that Stapleton might end up pulling it out in November…well, there aren’t any.