Get More Smarter on Thursday (October 4) 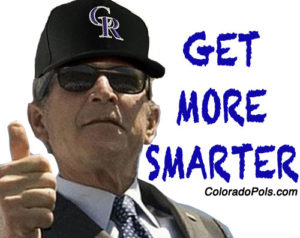 The Colorado Rockies take on the Milwaukee Brewers today in Game 1 of the National League Division Series. First pitch is scheduled for 3:07 pm.  It’s time to Get More Smarter. If you think we missed something important, please include the link in the comments below (here’s a good example). If you are more of a visual learner, check out The Get More Smarter Show.

► The White House and U.S. Senate are reviewing an FBI report into allegations of sexual assault and misconduct by Supreme Court nominee Brett Kavanaugh. As the Washington Post reports, there’s a big ‘ol lump under the rug:

As the Senate began reviewing the new FBI report on Judge Brett M. Kavanaugh on Thursday, both Judiciary Committee Chairman Charles E. Grassley and the White House stood by President Trump’s Supreme Court nominee, saying the investigation found nothing sufficient to corroborate allegations of sexual misconduct while Kavanaugh was a teenager.

“There’s nothing in it that we didn’t already know,” Grassley (R-Iowa) said in a statement after being briefed on the report by his staff. “It’s time to vote.”

Senators are allowed to view the new FBI report behind closed doors, but the information is not expected to be released publicly. As Bloomberg News reports, there are two GAPING holes in the FBI’s report:

The FBI hasn’t interviewed Supreme Court nominee Brett Kavanaugh or Christine Blasey Ford because it doesn’t have clear authority from the White House to do so, according to two people with knowledge of the matter.

Instead, the White House has indicated to the FBI that testimony from Kavanaugh and Ford, who has accused him of attempting to rape her when they were in high school, before the Senate Judiciary Committee last week is sufficient, said the people, who asked to not be identified discussing the sensitive matter.

Yes, you read that correctly. It appears that the FBI “investigated” claims of sexual assault and misconduct without interviewing the two people most directly involved in these claims. The understatement of the day comes from the Washington Post, which says the FBI report has been “highly curtailed.” As Westword reports, it appears that sexual assault/misconduct accusations from Boulder resident Deborah Ramirez were also given only a cursory investigation.

The Senate could vote on Kavanaugh’s confirmation as soon as Saturday.

► If Republican gubernatorial candidate Walker Stapleton doesn’t show up to the State Treasurer’s office today, it will have been at least 30 days since he last appeared at the State Capitol.

The @Rockies are headed to the #NLDS with a 92-72 record this season!@WalkerStapleton, on the other hand, is 0 for 29 on showing up to work (although we think the losing streak started earlier than that) #copolitics #cogov #Rocktober #whereiswalker https://t.co/jzxAPToyrJ pic.twitter.com/8N4p0UdpPo

Republican State Treasurer candidate Brian Watson has apparently been taking notes. If he wins in November, Watson says has absolutely no intention of working as a full-time State Treasurer.

► Gubernatorial candidates Jared Polis and Walker Stapleton begin a string of 10 public debates on Friday. A squabble hosted by the Denver Metro Chamber of Commerce kicks things off on Friday morning, with a CBS4/Colorado Sun/KOA debate in the evening. Colorado Mesa University and Rocky Mountain PBS host a debate on Saturday in Grand Junction, and the Pueblo Chieftain moderates a discussion in Pueblo on Monday. The candidates will then go their separate ways before they reconvene in Colorado Springs on Saturday, Oct. 13.

We’ll be following the debates here at Colorado Pols with at least one Debate Diary.

► Colorado’s resident U.S. Attorney says that the state’s marijuana regulations are too loose, as the Associated Press reports:

Colorado’s system for regulating marijuana has too many loopholes that disguise illegal activity and jeopardize public safety, a federal prosecutor said Wednesday, detailing his motivation for boosting scrutiny in the first state to broadly allow cannabis sales.

U.S. Attorney Bob Troyer said he is particularly concerned with how companies that grow marijuana account for damaged product and the state’s system allowing people to grow a certain number of plants at home for medical use. He said both situations create an opportunity for marijuana to be sold on the black market and require federal prosecutors to take a closer look at Colorado’s regulated marijuana industry.

“If somebody is licensed by this state, should they feel at increased risk of federal prosecution now?” Troyer said in an interview with The Associated Press. “Yes. They should. We do a public safety analysis, not an analysis of whether someone has a piece of paper from the state.”

The Justice Department on Thursday announced criminal charges against seven Russian intelligence officers, accusing them in a sprawling indictment of hacking, wire fraud, identity theft and money laundering as part of an effort to distract from Russia’s state-sponsored doping program…

…According to the indictment, all seven defendants are members of the GRU, a Russian Federation intelligence agency within the Main Intelligence Directorate of the Russian military. They are accused of sophisticated cyberintrusions and the victims were anti-doping agencies and officials, sporting federations, and nearly 250 athletes.

In addition to anti-doping agencies, the GRU targeted others, including the Westinghouse Electric Corporation, a nuclear energy company in Pennsylvania.

► Republican gubernatorial candidate Walker Stapleton released a new television ad on Wednesday that only uses about three seconds to talk about Stapleton himself. The campaign of Democrat Jared Polis responded to Stapleton’s new ad with a zinger.

► Another Republican candidate in Colorado is being publicly bashed by a close family member. The son of HD-25 candidate Steve Szutenbach is even donating money to Szutenbach’s Democratic opponent, Lisa Cutter.

► If Brett Kavanaugh is confirmed to the Supreme Court despite multiple allegations of sexual assault and misconduct, he might not be there for very long. As Politico explains:

Indeed, it is entirely possible—no, likely—that, if they win control of the House in November, the new majority party will consider articles of impeachment against Kavanaugh before his seat on the high court is warm. The course of such a proceeding has the potential to be so perilous and unpredictable that wavering Republican senators should consider that possibility before casting their votes to put Kavanaugh on the court in the first place. Facts that come to light in impeachment could come back to haunt senators who vote to support him.

Accusations from Boulder resident Deborah Ramirez — and Kavanaugh’s apparent lies about when he first heard about the accusations — are among those that could come back to bite Kavanaugh and Senate Republicans.

► President Trump’s sister is in an uncomfortable spotlight following a New York Times investigation showing that the Trump family engaged in elaborate schemes to avoid paying hundreds of millions of dollars in taxes.

► The oil and gas industry is spending a bajillion dollars on several oil and gas ballot measures in Colorado. In the meantime, companies are rushing to snap up drilling permits just in case those efforts fail.

► Colorado’s legislature will reconvene on Friday, January 4 — much earlier (and on an unusual day of the week) than normal. As Marianne Goodland reports for the publication formerly known as the Colorado Statesman:

It’s actually required by the Colorado Constitution, and it has to do with this year’s elections of the five top statewide officers: governor, lieutenant governor, secretary of state, treasurer and attorney general.

For the reason why, look no further than the legal eagles in the Office of Legislative Legal Sources, which recently posted an explanation on its Legisource blog. The Constitution requires the General Assembly to declare the winners of the top four statewide offices. The legislature has to be in session to do that.

► Federal legislation to make helicopters safer is on its way to the desk of President Trump. As the Colorado Sun reports:

U.S. Reps. Ed Perlmutter, of Arvada, and Jared Polis, of Boulder, teamed up on the effort, which would require the Federal Aviation Administration to mandate that within 18 months all new helicopters be built with safer, crash-resistant fuel systems.

Federal air crash investigators found that the wreck of the helicopter as it took off from a hospital in Frisco on July 3, 2015, was survivable. But a ruptured fuel tank fed an intense, post-impact fire. The helicopter did not have a crash-resistant fuel tank.

Pilot Patrick Mahany was killed and two others aboard suffered serious injury.

► The Koch Brothers are going after Democratic State Sen. Kerry Donovan for having the temerity to propose Net Neutrality legislation in Colorado.

► Kayvan Khalatbari is suspending his campaign for Mayor of Denver.

► Ladies and gentlemen, the President of the United States of America.

► Get ready for another round of angry words about Columbus Day/Indigenous People’s Day. The “holiday” is coming up on Monday, Oct. 8. Maybe we should just join the Canadians in celebrating “Thanksgiving Day” instead.