WEDNESDAY UPDATE: Joey Bunch at the Colorado Springs Gazette attempts to throw Walker Stapleton a lifeline, in a story today giving Stapleton a wide-open chance to respond to the New York Times report on his family’s history with the Ku Klux Klan–a chance Stapleton notably fails to take:

Colorado Politics has sought for months to have a discussion with Stapleton about his great-grandfather’s ties to the KKK. On Tuesday he said this:

“All reasonable people understand my great-grandfather died in 1950, about 25 years before I was even born. (I) am focusing on the future.”

That answer isn’t even close to sufficient, particularly after you watch the campaign video above in which Stapleton extolls his great-grandfather’s record as Mayor of Denver with no acknowledgement of Benjamin Stapleton’s leadership role in the KKK whatsoever. Though many would argue Stapleton’s Bush family cousins aren’t exactly a highlight either, Stapleton can’t campaign on his family history while ignoring its most controversial data point. Stapleton is never going to get a more friendly reporter or outlet. This was a chance to respond eloquently and take this whole line of attack off the table for Democrats, and Stapleton punted instead. 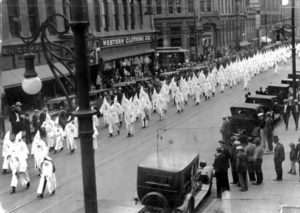 The Colorado political chattering class woke up this morning to a story in the New York Times that resurfaces a controversy Republican gubernatorial candidate Walker Stapleton has tried mightily to avoid during his campaign for governor–his great grandfather Benjamin Stapleton’s avowedly (at least at first) pro-Ku Klux Klan administration as the mayor of Denver in the 1920s:

Mr. Stapleton, the candidate for governor, once embraced his great-grandfather, making Benjamin’s Stapleton’s civic work a top reason to elect him treasurer.

“My great-grandfather served five terms as Denver’s mayor in the 1920s, in the 1930s, in the 1940s,” he said in a 2009 campaign ad, ticking off the elder Stapleton’s accomplishments — building the airport, reinvigorating the park system. “I’m really proud of my family’s public service.”

But as residents have become more aware of his family’s ties to the Klan, Mr. Stapleton has had to tread more carefully, mostly dropping mentions of his great-grandfather from his campaign.

“It’s 100 years ago, 30 years before I was born,” he said when the Colorado Independent raised the issue recently. “If everybody started trying to apologize or explain what happened with ancestors of theirs who died 30 years before they were born, people would be doing a lot of explaining.”

You can watch the not-so-well produced video above in which Stapleton proudly invokes his great-grandfather’s service as Mayor of Denver. Benjamin Stapleton is the strongest historical tie that Walker Stapleton has to the state, key to his much-lampooned claim to be a “fourth-generation Coloradan” born in Greenwich, Connecticut.

The problem for Stapleton, of course, is that he can’t have this both ways. Stapleton can’t claim to be “really proud of my family’s public service,” specifically Ben Stapleton’s public service, without acknowledging that it wasn’t all City Beautiful and the former airport we still wish was open because it was way more convenient than driving to Kansas like we do today. To celebrate Ben Stapleton’s history without acknowledging that he was a key figure in the Ku Klux Klan’s dominance of local politics in the 1920s is to whitewash that history–and it’s wrong. Whether or not you support renaming the Stapleton neighborhood, collectively we have an obligation to be honest about this ugly history in the state we all call home.

And you know what? So does Walker Stapleton. This seems to be an issue that our ever-polite local political reporters have been dissuaded for whatever reason from covering, but fortunately the New York Times is not so easily browbeaten into submission by Stapleton’s PR guys.

It’s the one thing Walker Stapleton doesn’t want to talk about. That may be the biggest reason why we need to.