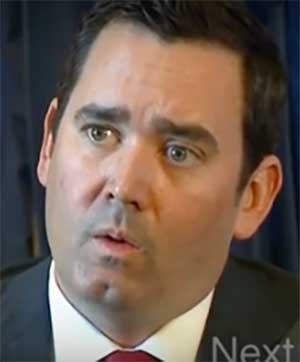 The Hartford Courant–that’s Hartford Connecticut, a nice town if you ever get there–has an in-depth story this weekend profiling two of the state’s native sons now making their respective upward ascents in politics from two different sides of the aisle. We didn’t know this before now, but apparently Connecticut Sen. Chris Murphy (D) was a classmate of Colorado GOP gubernatorial nominee Walker Stapleton, when they both attended the highly selective Williams College in Williamstown, Massachusetts!

Stapleton is the newly crowned GOP nominee for governor in Colorado, where one of his campaign ads boasted that he was the only state treasurer in the nation to embrace Trump’s tax cuts and that he’ll “take the fight to liberals” to end sanctuary city policies.

But as our readers know, there’s a bit of a wrinkle in Stapleton’s bio:

His refrain has been that he’s a “fourth-generation Coloradan,” which led one Colorado television station to fact-check Stapleton’s claim about his roots. He’s not the first member of his family to leave Connecticut to go into politics.

“Hey, George Bush went to Texas when he was 18 years old,” said Stapleton’s father, Craig Stapleton, referring to the 41st president, who also grew up in Greenwich. “If they want to make Walker out as a Connecticut guy, they’ve got a lot of work to do…”

“From Colorado’s point of view, he’s a local,” Craig Stapleton told The Courant of his son.

Now that is without question the most straightforward defense we have heard for Walker Stapleton’s debunked claim to be a “fourth-generation Coloradan” yet. George W. Bush did it too! This practice of growing up a Bush family Connecticut Yankee, then resettling in the great American hinterland to start one’s career in Republican politics, is nothing less than a Bush family tradition! You can just picture the whole extended family gathered around the hearth at the family’s compound in Kennebunkport, Maine for Christmas, Grandpa Bush gleefully “David cop-a-feeling” the household staff, and the family’s many illustrious scions swapping their war stories of political conquest out in “flyover country.”

The problem, of course, is how this casts Walker Stapleton’s entire career in Colorado politics in something akin to the worst possible light. It’s not like Coloradans are inherently mistrustful of outsiders, since a large portion of the state’s population wasn’t born here either. The problem, like Stapleton’s ridiculous claim to be “the only state treasurer” to support Trump, is that Stapleton is the one affirmatively putting these lies out there to be debunked. Stapleton didn’t have to falsely claim he’s a “fourth-generation Coloradan.” The damage from the exposed lie in both cases was much worse than the lie was worth in terms of persuading the undecided. It was stupid not least because it was unnecessary.

But it’s at least clear why–why the needless bullshit, and in a larger sense, why Stapleton at all.