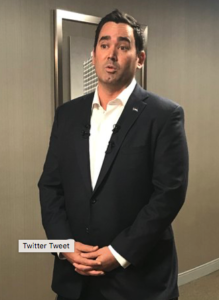 Swirling on the fringe of Republican Walker Stapleton’s run for governor is the question of how, and if, he should address the fact that his great-grandfather, former Denver mayor Benjamin F. Stapleton, was a leader of the Klu Klux Klan in Colorado in the 1920s.

Benjamin Stapleton’s KKK ties have led community groups and associations to remove “Stapleton” from their names. It’s led one of Stapleton’s GOP opponents to accuse Walker Stapleton of using his family’s vast wealth to try to cleanse his name in the community.

In a vote earlier this year, after a prolonged debate, residents of the Stapleton United Neighbors neighborhood association came seven percentage points shy of the required 60 percent necessary to change their neighborhood’s name to “Central Park United Neighbors.”

Stapleton has mostly avoided comment on the debate about his great grandfather, but last month he told the Colorado Independent’s Corey Hutchins that he’d “leave it to others to opine on what happened in Colorado 100 years ago.”

“I absolutely condemn racism and I’ll leave it to others to opine on what happened in Colorado 100 years ago,” Stapleton told the Independent, a left-leaning publication.

In this comment, which appears to be his only response to the KKK controversies involving his family, Stapleton stops short of specifically condemning his great-grandfather’s actions or apologizing for them, leading some to question whether his response goes far enough.

One Republican, Casper Stockham, who’s running in the GOP primary to face U.S. Rep. Diana DeGette of Denver, wrote on Facebook that he thinks Walker Stapleton should take further action, in part to shield himself from Democratic attacks.

“From my perspective, what Walker needs to do is make a clear statement that he’s distancing himself from his Democrat KKK relatives and their policies,” said Stockham when asked about his Facebook comment by the Colorado Times Recorder.  “He didn’t do anything wrong, but if he wants to apologize for his great-grandfather’s mistakes, that’s fine. And I think it would help. He needs to address it.”

While not addressing his great-grandfather’s KKK ties, such as his appointment of KKK government officials, his attendance at KKK gatherings of hooded followers, and more, Walker Stapleton has lavished praise on Benjamin Stapleton’s accomplishments as mayor of Denver.

When he first ran for office in 2009, Stapleton produced a video touting the “great” accomplishments of Benjamin Stapleton, including “helping reinvigorate the Denver parks system” and “building Colorado’s first municipal airport, Stapleton Airfield.”

“Plain and simple, Democrats won’t let up on this, if he’s the candidate,” said former Republican candidate for governor Steve Barlock, who’s been Stapleton’s fiercest critic on the KKK issue on the campaign trail. “The only thing he can do is denounce his family’s name. Change the [Stapleton] neighborhood’s name. Ask Michael Hancock to take down his great grandfather’s pictures in city hall. And pressure the history museum to put his great-grandfather back on the KKK plaques.”

“These politically elite, dynastic families are like the KKK or the mob,” continued Barlock, who was the Trump Campaign’s Denver co-chair in 2018. “It’s an elite family.”

The Stapleton campaign did not return an email seeking comment.

A Google search on the question of whether people or candidates should apologize for the racism of long-dead family members yields the full range of ideas, as you’d expect, from full-on apology to a don’t-even-bother-me-with-this-irrelevant-question stance.

In an essay in the Washington Post, author Marianne Williamson wrote:

We do not adequately teach our children the racial history of America since the end of the Civil War, from the horrors of white supremacy and segregation and regular lynching and Jim Crow laws and voter suppression, to existing patterns of criminal injustice and the contemporary realities of mass incarceration.