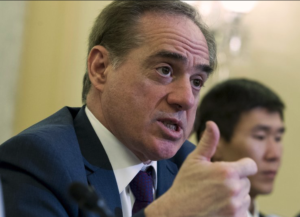 Sorry, Sec. Shulkin, but the correct hand gesture should be a thumbs-down.

Trump made the announcement on Twitter that Shulkin was out and that he’d nominated White House physician Rear Admiral Ronny Jackson to succeed Shulkin at the VA.

“Dr. Shulkin came from within the VA and did nothing to clean up the culture of the bureaucratic incompetence that has defined the leadership at the VA,” Coffman said in a statement. “I’m absolutely convinced that only someone from outside the VA can clean up the VA, and I hope that Admiral Jackson will be Marine Corp tough in getting that mission accomplished. Our veterans deserve better.”

Shulkin’s ouster had been anticipated, and sought by Coffman, for weeks after an inspector general report found Shulkin improperly accepted Wimbledon tickets on a trip to Europe, that he lied about the trip, and that one of his aides doctored emails so his wife could travel along with him.

Coffman demanded Shulkin’s resignation in late February, which is kinda Coffman’s thing; he called for VA Secretary Eric Shinseki to be fired in May 2014 and publicly feuded with Shinseki’s successor, VA Secretary Bob McDonald, just one year later. Alas, Coffman never had the opportunity to call for Sarah Palin to be canned from the VA.

Coffman has also spent years passing the buck (his version of “leadership“) for problems with the new VA Hospital in Aurora. Coffman spends most of his time shaking his fist at people in his role as a member of the House Veterans’ Affairs Committee and the Chair of the Oversight and Accountability Subcommittee.

While Trump has apparently already found his new appointee for VA Secretary, it isn’t sitting well with Veterans groups, so maybe it’s time for Coffman himself to start campaigning for the job. If every VA Secretary who gets the job earns nothing but contempt from Coffman, then Coffman himself should step up and show ’em how it’s done.

Coffman already has his MAGA hat; he should toss that puppy on his melon and double-time it on over to the White House.