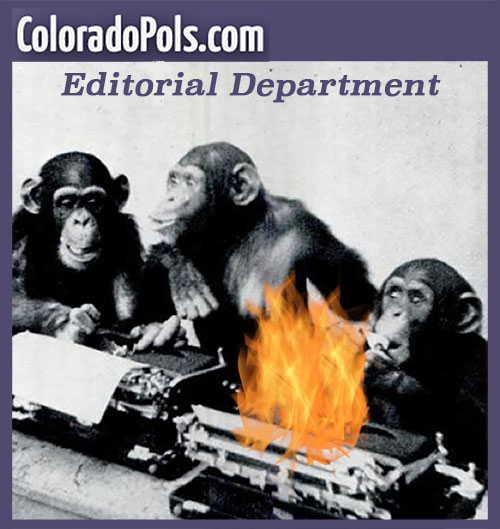 Colorado Pols is opening a new “Editorial Department” to deal with opinion pieces, blog entries, and other assorted Op-Ed commentary.

Today, we take a look at an editorial piece penned by Rep. Mike Coffman (R-Aurora) that appeared in the Denver Post on Saturday, titled, “Completed Aurora VA hospital is in sight.”

Coffman’s editorial seemed a little…light on some important points, so we wrote a different version.

Here’s how it should have looked (Editorial Department suggestions are in bold font).

Click after the jump to read the full text…

Finally, a completed Aurora VA hospital is in sight. In early October, Congress voted to fully fund its construction, and the president has signed the legislation.

This was no small feat. Despite the Department of Veterans Affairs’ (VA) gross mismanagement and negligence, I look forward to celebrating the completion of the VA hospital in Aurora thanks to a bipartisan effort from the Colorado delegation. I am a member of the House Veterans’ Affairs Committee and the Chair of the Oversight and Accountability Subcommittee, and while I did virtually nothing to assist this project in moving forward, you should totally thank me when I’m back in Aurora.

The road to this event is a long one. More than a decade ago, the VA announced plans to replace the aging Denver VA hospital. Five years later, the VA broke ground on the current stand-alone hospital facility with an initial estimated cost of $583 million.

Fast forward to April 2013. The Aurora hospital was nowhere near completion and mired in protracted dispute between the VA and the contractor. The Government Accountability Office (GAO) issued a report that found the Aurora project and three other VA projects were all drastically over budget and behind schedule. About 10 months later I finally got around to introducing legislation that was essentially a rehash of the GAO findings. I think we voted on it. I don’t remember.

Following that report, I introduced legislation for the Army Corps of Engineers to take over the VA’s major construction projects. Construction management is simply not the VA’s job. The mission of the VA is to provide the health care and benefits that our veterans have earned through their military service. I read all of that in the GAO report, too.

Unfortunately, VA leadership did nothing to address these problems. Despite the full knowledge of the GAO report and the abject failures of VA construction projects, Glenn Haggstrom, the manager of those construction projects, was never fired nor disciplined for his failures. In fact, he received a substantial bonus.

Even more astounding, a year after the GAO report, Haggstrom testified at a VA Oversight and Investigation Subcommittee field hearing in Denver that the Aurora project could still be built for the initial $604 million despite the GAO report. And in September 2014, VA Secretary Robert McDonald told me he stood by Haggstrom’s claim that the project could be completed for $604 million. I just can’t stop writing the word “Haggstrom.” It rolls off the tongue.

Last December, construction on the hospital ceased after the contractor, Kiewit-Turner, won its legal suit against the VA for breach of contract. The VA submitted a design for a Ferrari with a Ford budget and somehow expected the contractor to make it all work out. I sent a letter to somebody at the VA demanding…something or other. You want to get something done in Congress? You write somebody a letter.

Finally, after Kiewit-Turner prevailed in court, Haggstrom was laterally moved to another position in the VA. He was then allowed to retire, retaining his bonus and a full pension. The fact that Haggstrom wasn’t fired in April 2013, when the GAO report was made public, is one more example of how disengaged VA leadership is from reality.

Shortly before Christmas, Kiewit-Turner agreed to restart work only after the VA met its demands to turn over all construction management responsibilities to the Army Corps of Engineers and to pay all the subcontractors for their work on the endless number of change orders that the VA had them do. The first thing the Corps did was to re-estimate the project’s total price: a whopping $1.67 billion.

You want to hear something even more astounding than that? In March 2015, I told this to CBS4 Denver when asked about the cost to complete the VA hospital: “I’m shocked — really — the cost overruns are going to be over a billion dollars. Sticker shock.” Isn’t that funny what I said there? It’s funny because I was talking about the budget going over a billion dollars during a Veterans’ Affairs Committee meeting in November 2013, so I already knew that the project was ridiculously over-budget!

Since then, I have worked with House leadership, the Veterans Affairs Committee, the Colorado delegation, and others to secure funding to finish the hospital. I can’t take credit for all of the work, or even some of the work, really. But I did nod my head in agreement when other Members of Congress came up with a suitable plan.

An abandoned, half-completed structure would stand as a monument to our nation’s inability to meet its obligations to the men and women who have sacrificed so much in defense of our freedom. Did you know I was a Marine?

From the beginning, the VA has mismanaged this project. Not only has the VA’s bungling of the hospital put it years behind schedule and stuck taxpayers with a bill for an additional $1 billion, it also has deprived veterans of the state-of-the-art health care they earned through their military service. I’m going to demand that Congress create an Oversight and Investigations Subcommittee to investigate what went wrong here…er, I mean, you know, another one.

We must make sure this never happens again. Fortunately, a key reform was passed along with funding: The VA is prohibited from ever managing another major construction project. Having the VA out of the hospital construction business is a victory for both our veterans and the taxpayers. Did I mention that I was in the Marines?

More reforms are needed. In story after story, we read about veterans waiting for months to see a doctor or being denied care. Nobody ever seems to quote me in any of these stories, but the Denver Post always lets me play Monday-morning quarterback in the Op-Ed section. Thanks, bros.

It’s been a difficult road, with reports of misconduct, corruption, and hefty cost overruns. In the end, however, the Aurora VA Hospital will serve our veterans, and I am proud to have almost played a part in ensuring its completion.

U.S. Rep. Mike Coffman serves on the Armed Services Committee and Veterans Affairs Committee, where he is the chairman of the Subcommittee on Oversight and Investigations. No, really.