The Perfect Chance For Mike Coffman To “Stand Up To Trump” 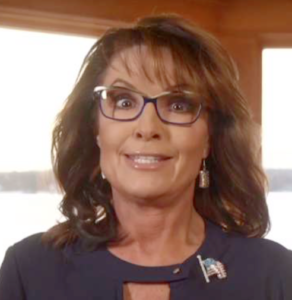 The Palin aide said that Palin recently told Trump transition officials, “I feel as though the megaphone I have been provided can be used in a productive and positive way to help those desperately in need.”

The Department of Veterans Affairs is the largest government agency, with over 300,000 federal employees and a budget of $182 billion for 2017…

Palin, the GOP’s 2008 vice presidential nominee, has not been to Trump Tower in New York City to meet with the president-elect, but she was one of his earliest and highest-profile endorsers. The Palin aide said she has had discussions with the transition team, and the top transition official confirms this.

Former Alaska Gov. Sarah Palin, who resigned from office before completing her term after celebrity called above her responsibilities as governor, has little relevant experience for the important job of VA Secretary–and it’s very difficult to see how she would be a qualified candidate for this position. Depending on how you feel about Palin, one of America’s most polarizing and brash political luminaries, you might find that to be an understatement.

GOP Rep. Mike Coffman, a veteran who has campaigned hard on his efforts to “hold the VA accountable” for cost overruns at the Aurora VA hospital construction site, promised voters in his swing district that he would “stand up to Donald Trump”–a promise already in question after Coffman enthusiastically backed up Trump’s harsh immigration agenda as soon as the election was over.

Well folks, assuming Coffman’s concern for the Department of Veterans Affairs was a real thing instead of just a political affectation to win votes, we expect he’ll have to comment about a perhaps singularly unqualified candidate to run it.