It’s Okay, Because Mad Mike Coffman Was in the Military 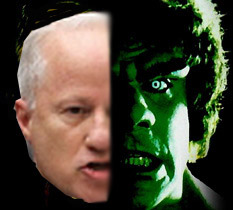 Washington D.C. has been abuzz about a spat between Colorado Republican Rep. Mike Coffman and Veterans Administration Secretary Bob McDonald during a House Committee hearing yesterday. Coffman was grilling McDonald during a meeting of the House Veterans Affairs Committee when McDonald took exception to Coffman's grandstanding on the issue of a new VA Hospital in Aurora. From the Associated Press:

McDonald was defending the VA's budget at a hearing when he and Colorado Rep. Mike Coffman tussled over construction delays and cost increases at the long-delayed hospital project. After a few minutes of arguing, McDonald snapped at Coffman: "I've run a large company, sir. What have you done?"

Coffman, an Army veteran, did not respond at the hearing. But the four-term lawmaker said in a statement later that he could tell McDonald a few things he hasn't done.

"I have never run a federal agency that tolerates corruption the way the VA has. I've never built a hospital that's years behind schedule and hundreds of millions over budget. And I've never been a shill for inept bureaucrats who allowed American heroes to die on a medical waiting list," he said.

Conservative media outlets are all up in arms that someone would dare question Mad Mike Coffman because Coffman is an Army and Marine Corps veteran who served in Iraq and it's his job to be a raging asshole, or something (more on that in a moment). We transcribed the relevant section of the hearing below, but it's important to watch the video so you can see the context in which this occurred. It's also important tor remember this key fact: a former Proctor and Gamble CEO, McDonald was sworn-in as the new VA Secretary on July 30, 2014 (following the resignation of former VA Secretary Eric Shinseki), which means he's only been in office for 6 months. Knowing this, read the transcipt and watch the video, and then see if you can tell us why you wouldn't have had a problem with a Congressman telling you that you are not going to do your job:

Rep. Coffman: This is a department mired in beaurocratic incompetence and corruption. And I've gotta tell you, I think the pubic relations is great today. But there's no substance. There is…no…substance…

Rep. Coffman: [Holds up a hand and says, “Let me finish…”] I fundamentally believe, that as unfortunate as it is, that at the end of the day — at the end of this President's term — that you will not have made a difference in changing the culture of this organization…by virtue of the fact that you continue to gloss over its problems.

Sec. McDonald: I am offended by your comment. Actually, I've been here 6 months. You've been here longer than I have. If there's a problem in Denver, I think you own it more than I do.

Rep. Coffman: For you to say that you are going to the Army Corp of Engineers to advise you as to how to correct the extraordinary problems…let me tell you, I think what you need to do is focus on providing the healthcare benefits that the veterans have earned, and get out of the construction management business…and to cede it to the Army Corps of Engineers…Each major construction project is hundreds of millions of dollars over budget and you are behind schedule. That's a problem.

Sec. McDonald: We work very closely with the Corps of Engineers. General Bostwick…he has told us he does not want total responsibility for all of the VA's construction. We're going to work with him. We're going to find out the right balance of that. We're doing that in Denver, as you know, and we appreciate your help to get that building finished, and get it finished for a good value for taxpayers.

Sec. McDonald: Maybe I'll give you my cell phone tonight, and you can answer the calls, and see if I'm making a difference for veterans, and see what they say. Or go on the websites — see what the veterans are saying on the websites. Ask the VSOs in the next group…I've run a large company, sir. What have you done?

Rep. Coffman: The fundamental challenge is for this organization to reflect your values, and I'm not sure that that's going to happen and I hope that it does.

As you can see in the video (after the jump), Coffman was trying to interrupt and doesn't appear to have initially heard Sec. McDonald when the latter said, "I've run a large company, sir. What have you done?" Coffman's office later issued an angry statement in response, and then the Concerned Veterans for America (a group funded by the infamous Koch Brothers) started stomping their feet and demanding that Sec. McDonald apologize to poor old Mad Mike:

Pete Hegseth, the CEO of Concerned Veterans for America, said McDonald was “disrespectful” of Coffman, who is the only member of Congress to serve in both Iraq wars, and demanded an apology…

…“Not only did Secretary McDonald attempt to shift blame for VA hospital construction delays and cost overruns for a facility in Rep. Coffman’s district, but he then unbelievably spouted, ‘I’ve run a large company, sir. What have you done?’ to a 22-year Marine Corps and Army veteran who served in both Iraq wars,” Hegseth added…

Let's see if we can get this straight: Rep. Coffman tells the Secretary of Veterans Affairs that he is not going to make a difference in changing the culture of the VA (even though McDonald has only been in office for 6 months), and it's McDonald who should apologize because Coffman is a veteran? And don't forget — Coffman has "pointed out several VA management failures over the last several years." Great work, Congressman!

We respect Coffman's military service, but serving in Iraq doesn't give him a free pass to berate anyone who dares challenge him. Mad Mike Coffman was often on display during debates last fall with Democratic challenger Andrew Romanoff, demanding respect for his military record — which Romanoff always made a point to applaud — while criticizing Romanoff for having an Ivy League education. Arizona Sen. John McCain famously overplayed his own military background during his 2008 campaign for President, and Coffman doesn't have a fraction of McCain's story to tell. If McCain, a decorated Navy pilot and Prisoner of War, can go too far in using his military record as an excuse for everything…well, so can Coffman.