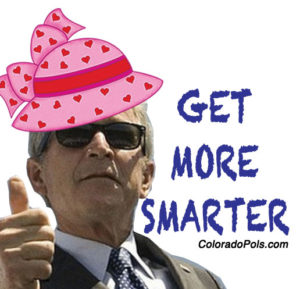 Because true love is measured by heart-shaped boxes of chocolates. It’s time to Get More Smarter. If you think we missed something important, please include the link in the comments below (here’s a good example). If you are more of a visual learner, check out The Get More Smarter Show.

► Colorado Senate Republicans somehow managed to figure out a way to enact the worst possible response to claims of sexual harassment against one of its members. After waiting for weeks to take action on the results of an investigation into sexual harassment claims against state Sen. Randy Baumgardner, Senate President Kevin Grantham orchestrated a truly absurd response on Tuesday. This editorial from the Aurora Sentinel sums up the nonsense well:

It was, at best, one of the most astonishing exhibitions of political tone deafness ever to ring out in the State Capitol. More likely, it was an ill-conceived scheme to diminish or dismiss allegations against Baumgardner, which, as told, border on assault. Grantham issued a scathing letter to the press, in which he tries to undermine the investigation conducted by an outside human relations consultant, without ever offering any details or explanation as to why he denounced the process. Then Grantham issued an edict that he considers “the matter closed.”…

…Baumgardner should either offer credible proof of his allegations that his accuser is a liar, or that the investigation was rigged, or he should offer a meaningful apology and resign from the state Senate.

Grantham has shown he hasn’t the temperament, the understanding nor the ethical temerity to lead the Senate chamber. He should step down as president now. [Pols emphasis]

Grantham will have a few more opportunities to screw this up even further. An investigation into an allegation of sexual harassment against Republican state Sen. Jack Tate was made available to Grantham on Monday — the same day that a second sexual harassment complaint was formally filed against Baumgardner.

Senate Democrats, meanwhile, are pushing ahead with a resolution to expel Baumgardner from the State Capitol entirely.

► Republicans are losing fundraising battles all across the country as more evidence of a rising Blue Wave presents itself. As Politico explains:

For the third Florida bellwether election in a row, the Republican candidate lost to the Democrat, giving activists and elites in both parties a sense that the GOP’s political grip is slipping in the nation’s largest swing state heading into President Donald Trump’s first midterm election.

Aside from her big 7.4 percentage-point win, what made Margaret Good’s victory Tuesday night over Republican James Buchanan so significant was that it took place in Florida’s 72nd House District. It had been held by a Republican in Sarasota County, where registered Republicans outnumber Democrats by 12,000, or about 10 percentage points. Buchanan, the son of local Congressman Vern Buchanan, also had an advantage in name ID.

And Trump had carried the district by 4.6 percentage points in a state that he won by just 1.2 points in November.

Have fun with this, “Chairman Gardner.”

► Questions surrounding the White House’s coddling of former staff secretary/domestic abuser Rob Porter continue to grow as more evidence suggests the Trump administration made a conscious effort to keep Porter on the job. From the Washington Post:

The White House struggled Tuesday to contain a widening crisis over its handling of domestic violence allegations against a senior official, as it reeled after sworn testimony by the FBI chief directly contradicted what President Trump’s aides had presented as the official version of events.

FBI Director Christopher A. Wray told the Senate Intelligence Committee that the bureau had completed a background report on then-staff secretary Rob Porter last July and closed out the case entirely last month. Wray’s account is at odds with White House claims that the investigation required for Porter’s security clearance was “ongoing” until he left his job last week, after his two ex-wives publicly alleged physical and emotional abuse.

The latest bout of turbulence is exacerbated by the administration’s reputation, earned over 13 chaotic months, for flouting institutional norms and misrepresenting facts to the public — a culture set by the president himself.

Shulkin’s chief of staff doctored an email and made false statements to create a pretext for taxpayers to cover expenses for the secretary’s wife on a 10-day trip to Europe last summer, the agency’s inspector general has found.

Vivieca Wright Simpson, VA’s third-most senior official, altered language in an email from an aide coordinating the trip to make it appear that Shulkin was receiving an award from the Danish government — then used the award to justify paying for his wife’s travel, Inspector General Michael J. Missal said in a report released Wednesday. VA paid more than $4,300 for her airfare.

The account of how the government paid travel expenses for the secretary’s wife is one finding in an unsparing investigation that concluded that Shulkin and his staff misled agency ethics officials and the public about key details of the trip. Shulkin also improperly accepted a gift of tickets to a Wimbledon tennis match worth thousands of dollars, the investigation found, and directed an aide coordinating the trip to act as what the report called a “personal travel concierge” to him and his wife.

Three days of meetings in Copenhagen and London were billed to taxpayers at a minimum value of more than $123,000.

► Coloradans who receive SNAP benefits are worried about a new proposal from the Trump administration, as Fox 31 reports:

The Trump administration said it wants to replace cash benefits with boxes of government food.

More than 400,000 Coloradans will feel the pinch if the proposal is approved, according to nonprofit Hunger Free Colorado.

► Colorado Senators Michael Bennet (D-Denver) and Cory Gardner (R-Yuma) are among a bipartisan group of 18 Senators pushing for protections in states that have legalized marijuana to be included in a budget deal.

Attorney General Jeff Sessions, meanwhile, is taking jabs at Gardner for the latter’s decision to block Justice Department nominations until Sessions agrees to back off on aggressively pushing federal drug laws in states that have legalized marijuana.

► The first major candidate in Colorado to submit petition signatures for access to the primary ballot is…Darryl Glenn?

► Republican gubernatorial hopeful Cynthia Coffman made it official in announcing that she will focus on making the GOP Primary ballot through the caucus/assembly process instead of via petition gathering. From Ernest Luning at the publication formerly known as the Colorado Statesman:

With three weeks to go until precinct caucuses, Attorney General Cynthia Coffman announced Tuesday she’s dropping her plans to petition onto the Republican gubernatorial primary ballot and will instead go through the caucus and assembly process.

In a telephone town hall conducted by her campaign, Coffman, one of nine GOP candidates for governor, told listeners she’d been gathering plenty of signatures but felt “disconnected” from potential primary voters and wasn’t “getting to have face-to-face conversations with folks” so decided to make the switch…

…Precinct caucuses are March 6. In order to qualify for the June primary ballot, candidates must received support from at least 30 percent of delegates to the April 14 state assembly. Their selection process starts at caucuses.

Going the caucus/assembly route became obvious for Coffman after Tom Tancredo dropped out of the Republican field for Governor. Coffman did not have the resources to mount a successful petition drive, though it’s not clear that a Republican base that dislikes her will be any kinder at the grassroots level.

► Someone might want to remind George Brauchler that he’s not running for Governor anymore.

► The Denver Post and CBS4 Denver were among the news outlets covering a YUGE rally Tuesday in support of the Colorado Civil Rights Commission.

Senator Chuck Schumer of New York, the Democratic leader, responded harshly to the president’s entreaty, noting with dismay that Mr. Trump last September ended the Obama-era program known as DACA, or Deferred Action for Childhood Arrivals, which protected the Dreamers from deportation and provided them work permits.

“The American people know what’s going on,” Mr. Schumer said on the Senate floor. “They know this president not only created the problem, but seems to be against every solution that might pass because it isn’t 100 percent of what he wants. If, at the end of the week, we are unable to find a bill that can pass — and I sincerely hope that’s not the case due to the good efforts of so many people on both sides of the aisle — the responsibility will fall entirely on the president’s shoulders and those in this body who went along with him.”

Republicans searching for a compromise on immigration were similarly perplexed. [Pols emphasis]

“The president’s going to have a vote on his concept. I don’t think it will get 60 votes,” Senator Lindsey Graham, Republican of South Carolina said, adding, “The bottom line then is: What do you do next? You can do what we’ve done for the last 35 years — blame each other. Or you can actually start fixing the broken immigration system. If you came out of this with strong border security — the president getting his wall and the Dream Act population being taken care of, most Americans would applaud.”

► A deadly home explosion in Firestone last Spring could have been prevented, as Denver7 reports:

The head of the Colorado Oil and Gas Conservation Commission revealed new details about what lead up to the deadly home explosion in Firestone and said the developer knew about the flowlines that caused the blast.

“That’s one of those things we might not ever understand, why that didn’t happen. Those flowlines were on a map that the developer had, and they were marked to be relocated,” COGCC Executive Director Matt Lepore said.

Investigators found the explosion in Firestone was caused by an uncapped gas line from a nearby existing well that had been leaking non-odorous gas into the family’s home for months.

Community members and concerned citizens have been asking for public access to gas pipelines across the entire state, but the COGCC has resisted those efforts.

► Remember to show your work with your answer:

Wednesday morning quiz: Is @SenBennetCO giving @SenCoryGardner cover? Is Gardner giving Bennet cover? Or do they both just think it’s the right thing to do either A) politically or B) morally? Scores will be handed out at end of the day. #cosen #copolitics https://t.co/W9FEMEdnpa

► Israeli police officials say there is sufficient evidence to indict Prime Minister Benjamin Netanyahu on charges of corruption and bribery.

► From the Denver Post to the Boulder Daily Camera, editorial boards across Colorado are genuinely perplexed by Republican attempts to defund the Colorado Civil Rights Commission.