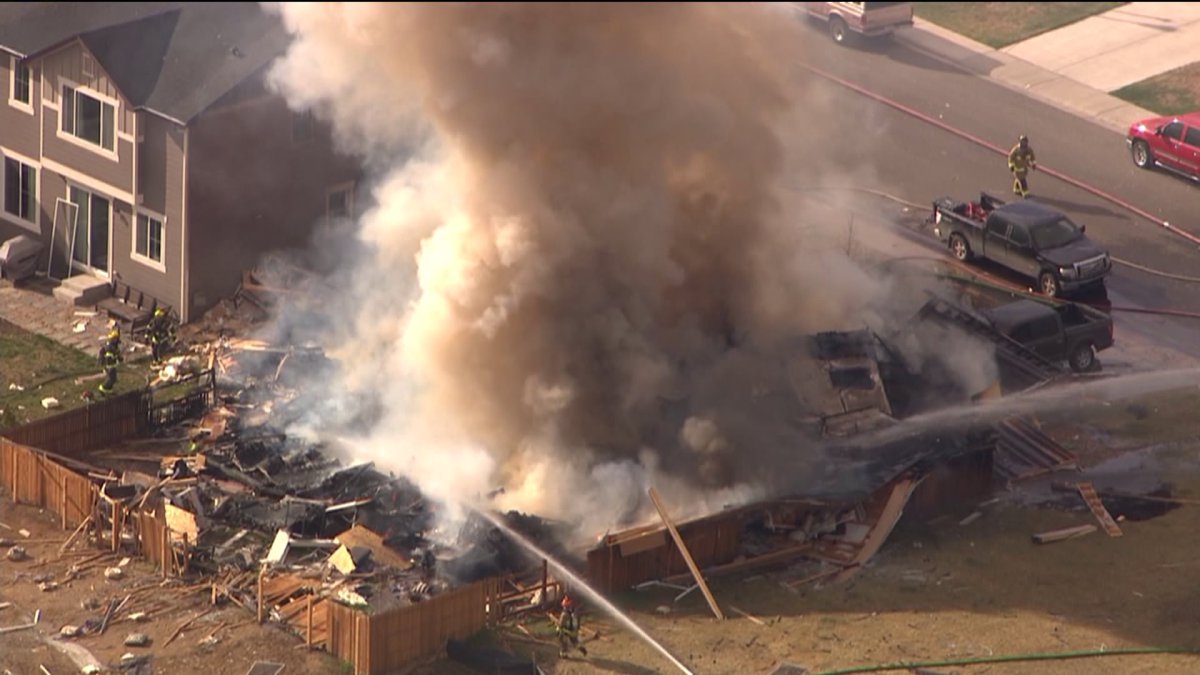 Denver7 reporting from the aftermath of a massive explosion last week in Firestone that completely destroyed a new home, killing two people and severely injuring two others–an explosion that occurred less than 200 feet from a 20-year-old oil well owned by Anadarko Petroleum:

A Houston-based company announced just over a week after a fatal home explosion in Firestone, Colorado that it would shutter production from 3,000 vertical oil wells in the area.

“Words cannot express how saddened we are that this occurred in a community where many of our employees, their families, and friends live and work,” Anadarko Petroleum Corporation Chairman, President and CEO Al Walker said. “We share the community’s gratitude for the courageous response of neighbors and nearby construction crews who quickly came to the aid of the family, as well as the first responders and others who made sure surrounding homes were kept safe.”

Anadarko confirmed the company operates 3,000 units of an older-model vertical well. One such unit, drilled by a previous operator in 1993, is just 200 feet from the site where a home that recently exploded was recently built.

The bodies of two community members were pulled from the rubble days after the April 17 explosion. Two others continue to recover in a hospital.

Anadarko’s acquisition of wells originally drilling by much smaller operators makes them responsible for defects in the drilling process they didn’t commit. It’s critical to keep in mind that the cause of the explosion in Firestone has not been conclusively determined–but the size and power of the blast would seem to rule out residential gas lines. That a new home was built less than 200 feet from an existing oil well is just another example of the problems the rapidly urbanizing Front Range faces dealing with both new and a legacy of oil and gas drilling.

And as the Colorado Springs Gazette’s Peter Marcus reports, the timing of this disaster is notable given debate that took place this year in the state legislature:

“We should take a cautious approach until we know for sure,” said Rep. Mike Foote, D-Lafayette, who sponsored legislation this year that would have required oil and gas operations to be located at least 1,000 feet from schools and other high occupancy buildings.

The legislation died on a Republican party-line vote…

“This whole situation is tragic. My heart aches for the family that lost loved ones and had others injured in the explosion and fire,” said Sen. Matt Jones, D-Louisville, who also sponsored the failed setback bill in the legislature this year.

“Although the cause of the explosion is under investigation, in response Anadarko shut down a gas well only 170 feet from the blown-up home, along with 3,000 area wells. The Colorado Bureau of Investigation needs to get to the bottom of this. And the Colorado General Assembly needs to take action on the results to protect Coloradans.”

As Marcus correctly notes, a bill to increase setbacks between schools and drilling sites died in the Colorado General Assembly this year on a party-line vote. Citizen initiatives to increase setbacks and give local communities greater control over drilling within their boundaries have been stymied in recent years by intense opposition from the oil and gas industry and bipartisan political cover. The passage of Amendment 71 last year makes it much more difficult to use the initiative process going forward.

Overall the oil and gas industry has done a remarkable job suppressing opposition in Colorado, creating a political climate in which no one has the power to move anything unfavorable to the industry. Since Colorado voters weighed in by passing a landmark renewable energy standard in 2004, there’s been much less to celebrate. Small-scale agreements on emissions rules have come largely as a result of federal pressure on the state for noncompliance with air quality standards. And as we all know, federal oversight is no longer something Colorado can depend on. All told it’s a great position for the drillers to be in.

Except, you know, when houses start blowing up. Too much of that, and the politics can change awfully fast.