Rep. Lori Saine (R), in custody after being arrested at DIA with a loaded gun.

Last month, Republican state Rep. Lori Saine was arrested at Denver International Airport after bringing a loaded 9mm semiautomatic pistol into an airport security checkpoint concealed in her purse. Saine was arrested after requesting an attorney during police questioning, and was released the next after a court appearance.

After an investigation by the Boulder DA, no charges were filed. Rep. Saine didn’t knowingly bring her pistol into the security checkpoint, and Boulder County DA Stan Garnett gave her the benefit of the doubt. We have no doubt Rep. Saine is relieved to have escaped without charges that could have, among other things, made it more difficult for her to own guns.

But much like ex-Rep. Jared Wright, now the General Manager of the Colorado Springs Gazette’s politics blog who left a loaded handgun in a House hearing room back in 2014, this will not go down in history as a model of responsible gun ownership.

This s**t is not ok. This is how kids get killed with handguns. #copolitics

That’s Republican donor and ex-House candidate Rick Enstrom rightly condemning Saine’s negligence after her arrest. But sometime between then and now, whatever contrition Rep. Saine may have had after her arrest for being careless with her gun seems to have evaporated: 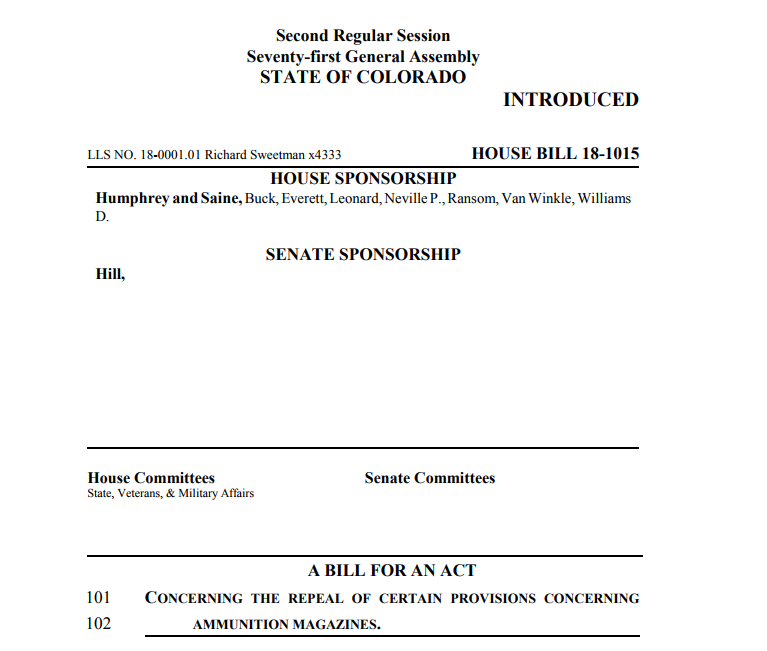 Because Rep. Lori Saine is a prime sponsor of legislation introduced this week to repeal Colorado’s 2013 law limiting magazine capacity to 15 rounds. This is the same legislation that Saine has sponsored for several years running now, part of the annual futile exercise mounted each year by Colorado Republicans to placate pro-gun voters by making a run at the 2013 gun control bills passed in the wake of the Aurora theater shooting.

Yes, Rep. Saine’s bill was always going to die in the House State Affairs Committee like it has each year. But this time, there may well be a discussion about hypocrite lawmakers who can’t keep their own guns safe. Like ex-Rep. Wright and Rep. Saine. As the bill’s sponsor, Rep. Saine will be sitting right there in testimony while her own irresponsible actions are held up as grounds for killing any bill she offers on the subject of guns.

Because to any outside observer, this is madness.