Rep. Lori Saine: Idiot With a Gun, Not Criminal With a Gun 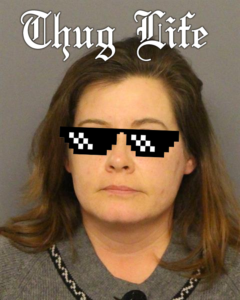 As the Boulder Daily Camera reports, special prosecutor Stan Garnett of Boulder County has decided not to press criminal charges against Rep. Lori Saine, who was caught last week inside a Denver International Airport security checkpoint with a loaded 9mm pistol:

The Boulder District Attorney’s Office has decided not to charge Colorado Rep. Lori Saine for reportedly having a gun at Denver International Airport last week.

The Boulder DA’s Office released a statement Thursday saying that Assistant District Attorney Ken Kupfner had reviewed the case and deemed charges could not be filed.

“The evidence in this case indicates that Lori Saine forgot the firearm was in her purse,” the statement read. “Based on the evidence presented, it is the District Attorney’s position that no criminal case against Ms. Saine can be proven beyond a reasonable doubt, and thus pursuant to the ethical standards guiding prosecutors in Colorado, no charges will be filed in this case.”

Under the law, accidentally bringing a weapon into an airport security checkpoint, while we can all agree is a stupid thing to do, is not a crime unless someone knowingly brings the weapon into the checkpoint. It does appear that Rep. Saine was not aware that a loaded 9mm handgun was in her purse, which means her case doesn’t meet the test for criminal charges.

News reports have suggested that, although weapons frequently turn up at DIA security checkpoints, very few people are ever arrested and jailed–most being given a citation and summons to appear in court. There has been some speculation based on this that Rep. Saine wasn’t given fair treatment by TSA and Denver police, but today’s Denver Post story explains what happened:

“When Denver PD officers, who were not aware that Ms. Saine was a public official, contacted Ms. Saine, she indicated that she ‘totally forgot’ about the gun,” the statement went on to say. “After being mirandized, Denver police attempted to further interview Ms. Saine, who refused and instead requested an attorney, as is her right.”

It’s certainly Rep. Saine’s right to request an attorney, but halting voluntary cooperation with the police in a matter where you can readily explain all the pertinent details with no need for lawyer can justifiably result in being transported and booked into jail while waiting for that process to play out–which then requires a hearing to set bond and eventually be released as Rep. Saine was. It’s the same process thousands of people innocent and guilty go through every year for all kinds of offenses, but it looks like DIA is sufficiently familiar with this kind of incident that they don’t usually arrest the offender and put them through the unpleasantness of incarceration.

Unless you don’t cooperate. In that case, when they have a gun in your purse inside an airport checkpoint, the cops can detain you while they sort everything out. We haven’t heard if at any point the words “I’m a state representative” were uttered by Rep. Saine afte the initial contact, but these days that tends to put Denver cops into strict by-the-book mode too.

The bottom line is that Rep. Saine appears to have been treated professionally by all parties, and had her case evaluated by a Democratic prosecutor who determined it didn’t meet the standard for criminal charges. Nothing about this experience can be considered unfair to Rep. Saine. The fact remains that Rep. Saine is demonstrably irresponsible with her own guns, much like former GOP Rep. Jared Wright who left a loaded pistol sitting in a House hearing room a couple of years ago. It remains to be seen if Rep. Saine will face any sanction from House Republican leadership over this episode, but it certainly doesn’t make her or the “gun nut” contingent of the Colorado legislature look good.

If you don’t know for sure every waking moment where your own guns are, we think there’s an argument to be made that you shouldn’t have guns. You certainly aren’t the right person to be trying to repeal gun laws as Rep. Saine has year after year. And lawmakers who stroll around the Capitol packing heat–in a building with metal detectors and armed police protection–maybe shouldn’t be allowed to do that either.

It would be a shame if someone were to actually get hurt because of a Colorado Republican’s negligence with guns–like a loaded pistol falling out of a purse no one remembered it was in, or a mislaid gun being picked up by a kid on a Capitol tour.