Top Ten Stories of 2017 #9: The Obamacare Repeal That Wasn’t 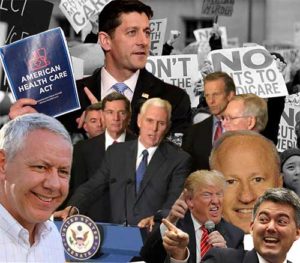 One year ago, Republicans were preparing a legislative agenda to go along with majorities in both chambers of Congress and their newly-awarded control of the White House. Republican leaders were licking their collective chops in anticipation of passing one conservative measure after another, blissfully unaware that they would have to wait nearly an entire year before celebrating their first major legislative accomplishment.

There were so many big political headlines this year that it’s easy to forget how much one single issue dominated the discussion in the first 9-10 months. Repealing (and maybe replacing) the Affordable Care Act (ACA) was priority #1, 2, and 3 for Congressional Republicans and President Trump in 2017. The White House was guaranteeing repeal as early as March.

As weeks dragged into months, it became increasingly clear that Republicans had massively over-promised on repeal. But it wasn’t until Arizona Sen. John McCain announced his opposition to the “Graham-Cassidy” proposal in late September that Republicans finally threw in the towel on a grand repeal. Indeed, Republicans failed so miserably at crafting repeal legislation that McCain had to publicly denounce the effort on two separate occasions. Here in Colorado, Republican legislators came to this conclusion much sooner than their counterparts in Washington D.C.; by early February they had essentially abandoned efforts to cripple the state health exchange.

Ultimately, the GOP could never figure out how to write a coherent repeal-and-replace bill that didn’t make the healthcare market exponentially worse for tens of millions of Americans. And it wasn’t just political insiders who were getting fed up; angry Americans were lining up to voice their displeasure with one Republican proposal after another. President Trump did direct several steps geared toward slowly strangling Obamacare, and Republicans included a repeal of the so-called “Individual Mandate” as part of their giant mess of a tax plan, but a major legislative statement rejecting Obamacare never materialized (we’re not counting the meaningless House vote to approve an early version of repeal).

Republican ineptitude on repealing Obamacare was symbolized well by the Congressional Budget Office (CBO), which scored a half-dozen iterations of legislation that failed more often than Sean Spicer (for more examples, click here, here, here, here, here, and here). The debate shifted so completely that Republicans like Sen. Cory Gardner (R-Yuma) spent much of the second half of 2017 doing damage control on their failed efforts at repeal.

Republicans began the year insisting that repealing Obamacare was a mandate from the American voters after seven years of endless opposition to the ACA. They ended 2017 by admitting that it was a political negative to even talk about repealing the health care law. As Dana Milbank wrote for the Washington Post on December 20:

“I shouldn’t say this,” Trump said, “but we essentially repealed Obamacare.”…

… Republicans, in rushing the tax bill to passage, kept fairly quiet about the fact that they were killing the “individual mandate” and thereby removing the engine that made the Affordable Care Act work. In doing so, they threw the health-care system into chaos without offering any remedy. And Trump just claimed paternity of the destruction. [Pols emphasis]

Trump, in a Cabinet meeting earlier Wednesday, let his fleeting encounter with honesty get the better of him when he read aloud the stage directions that called for Republicans not to advertise that they were killing Obamacare. “Obamacare has been repealed in this bill. We didn’t want to bring it up,” he said. “I told people specifically, ‘Be quiet with the fake-news media because I don’t want them talking too much about it.’ Because I didn’t know how people would —.” Trump didn’t finish that thought, but he said he could admit what had been done “now that it’s approved.”

As the year comes to a close, it is telling that President Trump is trying hard to convince you that he and his fellow Republicans did in fact repeal Obamacare (they did not). Congressional Republicans are tired of being stuck in an endless loop of non-repeal, so perhaps they will just play along and let Trump believe that this is all over now.

They can only hope that American voters will be just as confused in November 2018.