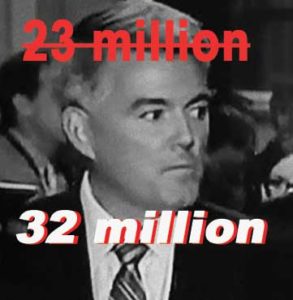 Trumpcare is mostly dead, but Senate Republicans seem intent on trying to prove that they can always come up with another healthcare proposal that is worse than the last. Today there is a new score out from the Congressional Budget Office (CBO) on a Senate Republican proposal to repeal — but not replace — Obamacare. It’s not good.

Congressional budget analysts estimated Wednesday that a Senate plan to repeal part of the Affordable Care Act with no immediate replacement would increase the number of people without health coverage by 17 million next year and 32 million at the end of a decade. The forecast by the Congressional Budget Office of the impact on coverage of the Senate GOP’s latest health-care legislation is nearly identical to estimates the CBO made in January based on a similar bill that passed both the House and Senate in late 2015 – and was vetoed by then-President Barack Obama. [Pols emphasis]

The new report also said the legislation would decrease federal deficits by $473 billion over that 10-year window.

The measure, which appears to have little chance of passing, would get rid of ACA premium subsidies as of 2020 and would eliminate the penalty most Americans face if they go without health insurance. It would end Medicaid expansion as of 2020 as well as repeal several of the ACA’s taxes. And the cost-sharing subsidies that have been paid to insurers to help lower-income consumers afford their deductibles and other health expenses would be repealed in 2020.

Senate Republicans had lunch at the White House earlier today, where President Trump mixed in threats and vague assurances in an effort to convince the Senate to keep moving forward on an Obamacare repeal plan because he really wants to use his Presidential pen to sign something.

As the Post mentioned, and as the Washington Examiner explains in more detail, today’s CBO score puts some numbers behind a repeal-but-don’t-replace plan that is nearly identical to something that Congressional Republicans tried in 2015:

With the Republican effort to repeal and replace Obamacare currently dead, Senate Majority Leader Mitch McConnell, R-Ky. vowed to revive the 2015 bill that repealed much of Obamacare’s taxes and spending (while leaving regulations intact), and then deal with the thorny negotiations about replacement after. Back in 2015, the partial repeal bill passed the Senate with a 52-vote majority.

Though there has been some turnover in the Senate since that December 2015 vote, many of the centrists who have been the most reluctant to repeal Obamacare — Sens. Shelley Moore Capito, R-W.V., Lisa Murkowski R-Alaska., Dean Heller, R-Nev., Bill Cassidy, R-La., and Rob Portman, R-Ohio — voted for the repeal bill. If they oppose it this time, they’ll have to beat back charges that they cynically voted for repeal two years ago when they knew former President Barack Obama would veto it, but reversed themselves when it was no longer symbolic, because President Trump will sign it into law. Susan Collins, R-Maine, voted no in 2015.

You can probably guess how Sen. Cory Gardner (R-Yuma) voted on this 2015 bill (he was a “YES”). Gardner will likely still pretend that he is undecided about a repeal-only option, but he’s already on the record having taken a position on this previously. That’s gonna sting.

Axios has more on the next potential steps that Republicans could take in their quest to destroy Obamacare and Medicaid and generally upend the healthcare industry in the United States. It seems unlikely that the Senate GOP would really go forward with some of these plans, but then again, there seems to be some determination to try to push forward the worst possible healthcare plan that they can imagine.