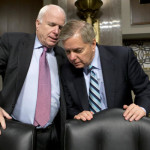 New York Times, so much for that:

“I cannot in good conscience vote for the Graham-Cassidy proposal,” Mr. McCain said. “I believe we could do better working together, Republicans and Democrats, and have not yet really tried. Nor could I support it without knowing how much it will cost, how it will affect insurance premiums, and how many people will be helped or hurt by it.”

It’s very difficult to see how the latest attempt to repeal the Affordable Care Act known as the Graham-Cassidy bill can pass without the support of Sen. John McCain–and that’s before other swing Senators like Sen. Lisa Murkowski follow his lead, which is likely now. McCain’s move also puts highly vulnerable Sen. Dean Heller of Nevada in a very bad position going into next year’s elections after Heller backed this latest effort.

And with that, once again, it’s all over but the shouting. We’ve certainly learned our lesson about calling “Trumpcare” really most sincerely dead through more mulligan attempts than we would have predicted. But for a host of procedural and political reasons, the repeal of the Affordable Care Act is now, well, deader than ever before.

Keep your zombie-hunting gear handy though.