Senate Republicans’ latest effort to repeal and replace the Affordable Care Act would quickly cost Colorado at least $6 billion in federal funds, and could end up taking $78 billion from the state in the long-term, according to new analysis out Wednesday.

The Graham-Cassidy amendment, named after its writers, Sen. Lindsey Graham, R-S.C., and Sen. Bill Cassidy, R-La., has until Sept. 30 to pass the Senate with a simple majority vote.

Afterward, due to parliamentary rules, the Senate would need 60 votes to pass a repeal-and-replace measure.

The Congressional Budget Office has said it won’t have enough time to do a full analysis of the amendment before it’s brought to the floor, which Senate Majority Leader Mitch McConnell said Wednesday would likely happen next week. So other organizations are stepping in to try and analyze the amendment before a possible vote.

UPDATE #2: The Graham-Cassidy healthcare bill would most certainly NOT be good for Colorado, as this graphic from CNN illustrates: 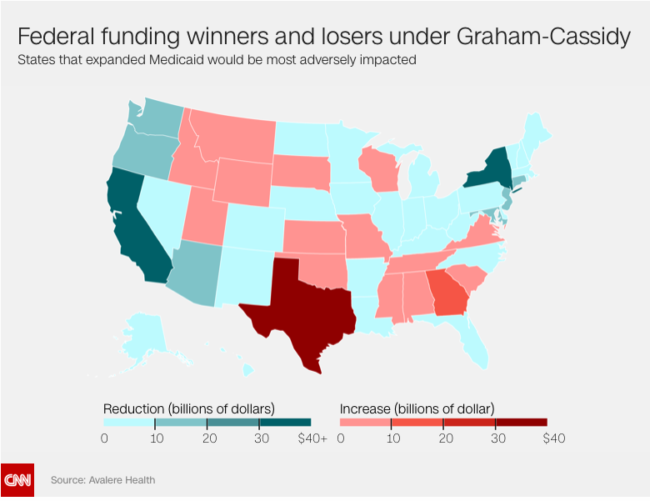 UPDATE: Mark Matthews of the Denver Post has more reaction from Colorado’s delegation:

U.S. Sen. Cory Gardner on Wednesday did not give a firm “yes” or “no” when asked about his potential support for the GOP’s latest proposal to unwind the Affordable Care Act.

“I’m trying to get some more information on it,” Gardner said during a brief hallway interview outside a confirmation hearing for Colorado jurist Allison Eid. “(We are) looking into the numbers. We don’t have the numbers that we think we need to make a decision.”…

…When asked about what specific information he would need to make a decision on Graham-Cassidy, Gardner said, “just additional information.”

Yeah, right. The only “additional information” Gardner needs is a specific time and place for when he is supposed to show up and vote YES. But we’ll give Matthews and the Post credit for noting Gardner’s bullshitty tendencies:

Gardner, a Republican from Colorado, made similar comments before his votes this summer on every other major GOP health care bill attempting to undo Obamacare that came before the U.S. Senate. He supported all of those pieces of legislation. [Pols emphasis]

“I can’t decide whether this is Groundhog Day or the definition of insanity: Every attempt is worse than the last.” 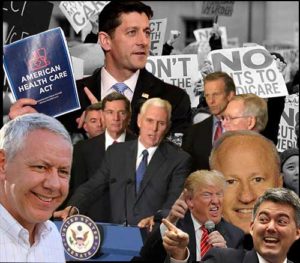 You’ve seen this movie before.

Senate Republicans have 10 days left to move forward with their last-gasp attempt at repealing Obamacare. After failing to get anywhere on three different repeal attempts earlier this year, Senate Majority Leader Mitch McConnell has until Sept. 30 to make something happen before the deadline expires to make changes under the “budget reconciliation” process (which allows legislation to move forward with 50 votes, instead of the normally-required 60 votes).

The Washington Post explains where things stand as of this morning:

Republicans are fixated on the latest version of their Obamacare overhaul legislation. But in their haste to secure approval, they’ve not exactly won over their deepest skeptics, who objected to the last dramatic repeal-and-replace go-round.

Doctors, hospitals, insurers, activists and governors have been staking out their positions on the Graham-Cassidy bill, which the White House and leadership are furiously pitching this week to Senate Republicans as their final chance to ditch the Affordable Care Act…

…But more significantly, Republicans still haven’t managed to win over industry groups — or convince some moderate Republican governors who worried that the previous plans would leave millions of Americans uninsured. Nor are many of the conservative activist groups — who were the most insistent on Obamacare repeal to begin with — terribly enthused about Graham-Cassidy, since they feel it would leave too much of the ACA in place.

According to the Post, healthcare industry groups (such as the American Medical Association) are largely opposed to Graham-Cassidy. Republican Governors around the country are split on their support, and conservative activist groups (such as Americans for Prosperity) are “cautiously supportive.”

“I don’t know what happened to Bill Cassidy,” Kimmel said. “But when he was on this publicity tour, he listed his demands for a health-care bill very clearly. These were his words. He said he wants coverage for all, no discrimination based on preexisting conditions, lower premiums for middle-class families and no lifetime caps. Guess what? The new bill does none of those things.”

As Politico reports, Republicans are facing strong headwinds yet again:

Republicans hoping to jam a last-minute Obamacare repeal plan through the Senate are confronting a rising tide of opposition as health care groups, patient advocates and even some red-state governors join forces against a bill they worry would upend the nation’s health care system.

The wide-ranging backlash threw the GOP’s repeal push into fresh doubt on Tuesday, even as White House officials and Senate Republican leaders insist they are on the verge of winning the 50 votes needed to dismantle Obamacare under a reconciliation bill that expires in two weeks.

Meanwhile, Senator Cory Gardner (R-Yuma) is still pretending to be undecided on Graham-Cassidy, but this charade has grown stale. Gardner has voted YES on every GOP healthcare bill that has made it to the floor this year, and there’s no reason to think he won’t be an automatic YES once again — no matter how much he equivocates in public.

The Graham-Cassidy bill may be Republicans’ last best chance at repealing Obamacare, but that doesn’t change the fact that the legislation would be devastating to many Americans. Millions of Americans would be left uninsured under Graham-Cassidy, and popular provisions such as protections for pre-existing conditions would be eliminated. For anyone who opposed previous Republican attempts at repealing Obamacare, there’s little reason to be excited about Graham-Cassidy, which has many of the same problems as its predecessors (and may actually be worse in many regards, as Sarah Kliff writes for Vox.com).

After being burned before, McConnell says that he is not committed to a floor vote before the end of the month, but other Republican leaders are pushing for what the New York Times calls a “showdown vote.”