Tom Tancredo Hints at Run for Governor in 2018 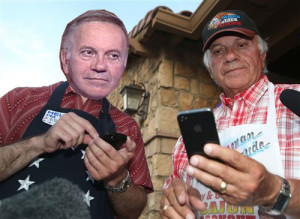 Tom Tancredo is his own consultant

It looks as though it may be Tom Tancredo time once again in Colorado. Ernest Luning has the news for the publication formerly known as the Colorado Statesman:

A Golden-based political action committee began circulating a petition Tuesday urging Tom Tancredo to run in next year’s GOP primary for governor of Colorado, but the former five-term congressman told Colorado Politics he’s so angry at Republicans that “it won’t take much” to persuade him to run.

Tancredo called it “infuriating” and “appalling” that Republican officials and candidates have kept silent after a Colorado Springs resort cancelled a conference booked by VDARE, an organization that describes itself as devoted to immigration reform — it’s named after Virginia Dare, the first child born to English settlers in North America — but that opponents charge is a hate group with ties to white nationalists.

“If I decide to run (for governor), I won’t have to be drafted,” Tancredo told Colorado Politics in an email Tuesday night. “I am so mad at the Republicans who are presently in office or in the hunt for not speaking out in defense of free speech that it won’t take much to push me over the line. This Colorado Springs thing is infuriating.” [Pols emphasis]

Tancredo added, “[T]he silence of the Republicans in this state was appalling. Not one came to (the) defense of liberty.”

Tancredo, who had been invited to speak at VDARE’s planned April conference at the Cheyenne Mountain Resort, excoriated “local officials in the most heavily Republican county in Colorado” for bowing to threatened protests and encouraging resort owners to pull the plug on the conference in a Breitbart News column published Monday.

Lots of politicians float their names for future office with no real intention of making that leap, but former Congressman Tom Tancredo is not like most politicians. And the militant anti-immigrant rhetoric that President Trump has helped return to American politics — which does have its supporters in Colorado — is right in Tancredo’s wheelhouse. 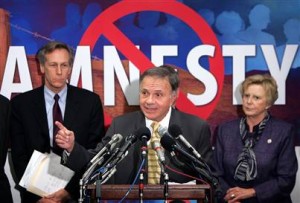 Tom Tancredo was a leading anti-immigrant voice in Republican politics (shown here at a news conference in 2013).

For the benefit of our younger readers, let’s pause here for a little Tancredo history lesson. Tancredo served six terms in Congress in CD-6 (1998-2008), at a time when the district boundaries were much different than they are today for Rep. Mike Coffman. Tancredo’s CD-6 stretched from southern Jefferson County east through Douglas County and was almost as reliably-Republican as today’s CD-5 in Colorado Springs. Tancredo declined to run for re-election in 2008 and instead made an ill-received attempt at running for President; he formally withdrew from the Republican field for President just before Christmas 2007 and endorsed Mitt Romney as the GOP nominee.

Tancredo’s second political act led to two separate bids for Governor of Colorado. In 2010, Tancredo ran for Governor under the banner of the American Constitution Party (ACP) after Republicans ended up with some guy named Dan Maes as the GOP nominee (the Dan Maes saga is a long, strange story; check out this 2010 summary of the Maes experiment for more detail). Then-Denver Mayor John Hickenlooper had little trouble winning a first term for Governor with 51% of the vote, but Tancredo finished second with 36% while the Republican nominee managed just 11% of the vote total.

Tancredo eventually re-registered as a Republican, and in 2014 he sought the GOP nomination for Governor. Tancredo and Bob Beauprez appeared to be in a tight race leading up to the June Primary, but in the last several weeks of the campaign, Tancredo seemed to fade enough that Beauprez went on to capture the nomination. Supporters of Tancredo openly complained that the Colorado Republican Party kneecapped his candidacy, both out of concern that he could win the nomination and out of spite over his 2010 dalliance with the ACP.

In late 2015, Tancredo publicly severed ties with the Republican Party and registered as an Unaffiliated voter, citing what he called an unacceptable moderation of the modern GOP. In order to seek the Republican nomination for Governor in 2018, however, Tancredo would merely need to change his registration before January.

Now that we’re caught up to the present, the most important question here is quite obvious: Could Tom Tancredo actually win the Republican nomination for Governor in 2018?

Whether or not Tancredo could defeat the Democratic nominee in November is a question for another time. The more immediate query is all about the Republican Primary. Tancredo’s star may have faded a bit here in Colorado, but he still has a nationwide anti-immigrant fundraising base — as well as a platform as a columnist for Breitbart — that has been re-energized by President Trump and the events in Charlottesville, VA earlier this month. Tancredo also has an independent streak that could bring crossover appeal; he was a vocal supporter of Amendment 64 (marijuana legalization) in 2014, which gives him a credibility on that issue that other GOP candidates can’t match.

It certainly helps Tancredo’s chances that there are already seven declared GOP candidates for Governor — with at least two more (Walker Stapleton and Cynthia Coffman) — set to declare in the coming months. If half of those candidates are able to make the ballot next June, Tancredo would need only a fraction of GOP Primary voters in order to capture the nomination.

There are a lot of establishment Republicans this morning who are really hoping that Tancredo was just fuming and isn’t actually serious about running for Governor.