Beauprez vs. Tancredo? The Difference For Dems

The 30-second spot focused on Beauprez, titled “Both Ways”, hits the former congressman for voting for “earmarks and spending bills while the national debt ballooned” and for supporting “the individual mandate that’s the cornerstone of Obamacare”, two lines of attack that are likely to turn off conservative primary voters.

The 30-second spot focused on Tancredo labels him “one of the country’s strongest opponents of Obamacare”, notes he called the Affordable Care Act “a scam” and concludes with this: “Tom Tancredo: He’s just too conservative for Colorado.”

That’s likely to be catnip for conservatives.

“It’s a good period of time while there’s some attention on this race to try and reinforce some negatives,” a Democratic operative close to the group told FOX31 Denver.

Make no mistake: the Beauprez ad is designed to hurt the GOP establishment’s choice with more conservative primary voters while the Tancredo spot, ostensibly an attack ad, is likely to solidify his support with conservatives who widely disdain Obamacare. 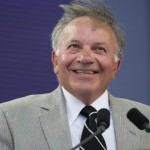 ​Since word of these ads broke last week, there's been plenty of speculation as to whether this apparent Democratic strategy to attack Beauprez with messaging that genuinely hurts him with conservatives, while pumping up Tancredo with what amount to back-handed compliments, reflects worry by Democrats about having to run against Beauprez. Naturally, at the top of the list of persons who hold this view are Beauprez supporters.

The bottom line? Beauprez's supporters are right. But only a little.

The overarching fact is one that we've been clear about from the beginning, and is now becoming evident among most observers: Gov. John Hickenlooper faces no serious threat to his reelection. If you accept the judgement that none of the candidates running against Hickenlooper have a viable shot at winning, the question becomes what effect the gubernatorial race's foregone conclusion of an outcome has on other races. In their best case scenario, Democrats would like Republican weakness in the gubernatorial race to affecting voting both down the ticket in legislative races, as well as in congressional races and the marquee U.S. Senate race.

We have only begun in this space to recount all of the many reasons why Beauprez cannot win a general election against Hickenlooper, and will most likely be defeated by a margin rivaling his historic 2006 disaster campaigning for the same office if nominated in 2014. We've been talking about Beauprez's support for the individual mandate for weeks. Tancredo also can't beat Hickenlooper, but Tancredo's high profile as a leading nationwide anti-immigrant firebrand would make him a uniquely repellent candidate with which to brand Republicans at every level. Combine that singular disadvantage with Beauprez's ability to self-fund a vanity campaign for governor, which would necessitate at least some diversion of resources, and it's obvious why Democrats would prefer Tancredo.

But there's a big difference between preference in an embarrassment of riches…and "fear."