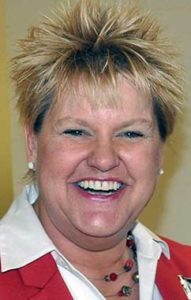 We’ve talked before in this space about the importance in politics — and really, life — of knowing the “First Rule of Holes.” If you are not familiar with this rule, it is very simple: When you find yourself in a hole, STOP DIGGING.

Brita Horn is the Routt County Treasurer and one of a gazillion Republicans seeking the office of State Treasurer in 2018. Earlier this month, Horn made the wrong kind of headlines after a mistake in her office meant that millions of dollars of property tax revenue were not distributed to local government programs on a timely basis. As the Steamboat Pilot reported on Aug. 1, Horn did not respond particularly well to this problem:

…she declined Tuesday to explain how the mistake occurred other than to make references to a software vendor and a personnel issue she said she couldn’t discuss in public.

“I don’t call it an issue, I call it a concern,” Horn said of the incomplete payments. [Pols emphasis] “Routt County has some of the most amazing people that work for the citizens, and we’re finding these people are humans and make mistakes. I definitely take responsibility for the staff, and I’m ensuring it’s not going to happen again.”

Unfortunately for Horn, this “concern” is back in the news again. As the Steamboat Pilot reported on Wednesday, hell hath no fury like a former employee scorned:

The employee who Routt County Treasurer Brita Horn claims made a $5.8 million error that deprived local taxing entities of millions of dollars worth of their revenue for more than two months is speaking out and contesting her recent dismissal from the county.

Rani Gilbert, who was fired from the treasurer’s office in July for reasons unrelated to the property tax error, said she thinks Horn is wrongly blaming her for the mistake.

“I just want the people of my community to understand she has convicted me of something I did not do,” Gilbert said. “I’ve gone way out of my way to do the very best I can for Routt County.”

Gilbert also revealed this week she had her attorney send a letter to the county commissioners less than two weeks prior to her dismissal alleging Horn and her chief deputy treasurer Patrick Karschner engaged in unethical and possibly illegal behavior this summer.

Gilbert’s complaint against her supervisors specifically alleged she had evidence that Karschner had been working on Horn’s campaign for state treasurer during business hours in May in violation of county policies. Horn and Karschner denied that claim Wednesday. They also said they were not aware of the complaint prior to commencing pre-dismissal proceedings against Gilbert.

This isn’t earth-shattering stuff by any means, but in a GOP Primary with multiple candidates and no obvious frontrunner, these are the sort of stories that can sink a campaign. When Republican voters are having a hard time picking a favorite among similar candidates, stories like this give them a reason to narrow the field.