Chuck Plunkett and the First Rule of Holes 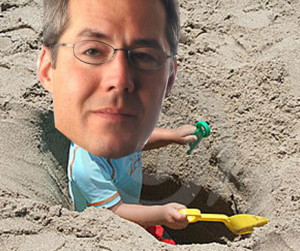 Chuck Plunkett hopes to escape this hole by digging furiously.

Yesterday we followed a rather bizarre decision by Plunkett to remove a story posted to the newspaper's political blog "The Spot." Plunkett took down a story Tuesday night about Republican Congressman Mike Coffman written by reporter Kurtis Lee (you can read about that original post here) that had appeared earlier in the day. Plunkett then offered up a rambling blog post of his own in an effort to explain his decision…which made absolutely no sense.

Well, on Thursday afternoon, Plunkett doubled-down on his own defense with an even more confusion explanation of his other explanation. Only in this explanation, Plunkett concludes with a convincing argument for why the story should have never been removed in the first place (which was clearly not his intention, but, whatever). Here's the lede of Plunkett's post this afternoon, titled, "No Facts Hidden from Mike Coffman Story."

On Wednesday I published a post on this site that meant to explain why a story about Mike Coffman’s views on personhood and abortion was taken off The Denver Post’s online edition the night before.

A day later I see that some are suggesting that the story has somehow been suppressed.

I submit that this is not accurate.

My blog post on Wednesday was written and published to provide the central facts that had been in the story that I had taken down. I provided these facts in the context that I felt the story lacked.

We'd like to give Plunkett the benefit of the doubt here, but it speaks volumes about his decision when he feels compelled to write two separate blog posts about why he pulled a story after it appeared online — and then titles it, "No Facts Hidden." This is sort of like a little kid standing over a mess on the floor saying, "I didn't do it" even before you had a chance to ask.

Kurtis Lee's original story featured a new quote from Coffman about Personhood (namely, Coffman's reasoning behind his recent flip-flop on the issue), but Plunkett says he pulled the story in part because it didn't include the proper "context" — namely, that it failed to mention that Coffman's office issued a press release last summer in regards to H.R. 1797, which dealt with allowing exceptions for abortion in the case of rape or incest. This is an odd point for Plunkett to make, because Lee's story did mention Coffman's statement last summer. As we wrote Wednesday:

This explanation is strange to say the least, since the story by reporter Kurtis Lee (now deleted) does refer to Coffman's 2013 vote for H.R. 1797:

Over the weekend, in a brief interview at the state GOP assembly, Coffman broadened his position on abortion, saying he now supports it in cases of rape and incest — a position he did not voice in 2012, when he supported abortions only to protect the life of the mother. In 2013, Coffman backed a House bill and noted his support for exceptions in the case of rape and incest. [Pols emphasis]

We also took note of Coffman's June 2013 vote for a late term abortion ban when it happened, and how it represented a marked shift from his prior opposition to all abortions, even in cases of rape or incest. This is not new information, and nothing in Lee's now-removed story is invalidated by this detail. Coffman previously supported banning abortion even in cases of rape or incest, and now he doesn't. That's the story.

Now, back to Plunkett's 2nd explanation ("No Facts Hidden from Mike Coffman Story") that appeared Thursday afternoon. Here's how he ends his 2nd explanation for removing the original story:

I’ve talked to some reasonable people who said they thought the Coffman quote that appeared in the online story was worth having on the record.

I agree with that point, so I provide this information from the story.

In our interview with Coffman on Saturday, we asked about his change of positions on personhood in 2012.

Coffman that year told The Post he would not be “endorsing nor opposing any state or local ballot questions.”

When asked Saturday to elaborate on why his position on personhood had changed, Coffman said: “There are parts of it that are simply unintended. … I think it’s too overbroad and that the voters have spoken.”

This year, Coffman said he’s opposed to Amendment 67, which defines an unborn child as a human being in the Colorado criminal code.

Coffman said there is no language he would change in the ballot initiative that would make him support it.

Whaaaaaaattt??? The original story was pulled because it didn't include something that it really did include, and by the way, here's why the story that I removed was actually important.

Plunkett obviously wants to convince Denver Post readers that he did not pull Kurtis Lee's story in order to be helpful to Congressman Coffman — that this was all about good journalism or something. Maybe that's true, but there's one person who is primarly responsible for making people think something funny is going on:

His name is Chuck Plunkett.