Colorado Christian University’s Western Conservative Summit, which has blown up into a fairly big deal over the last few years, released their list of speakers for 2017 this week–and it’s raising some eyebrows: 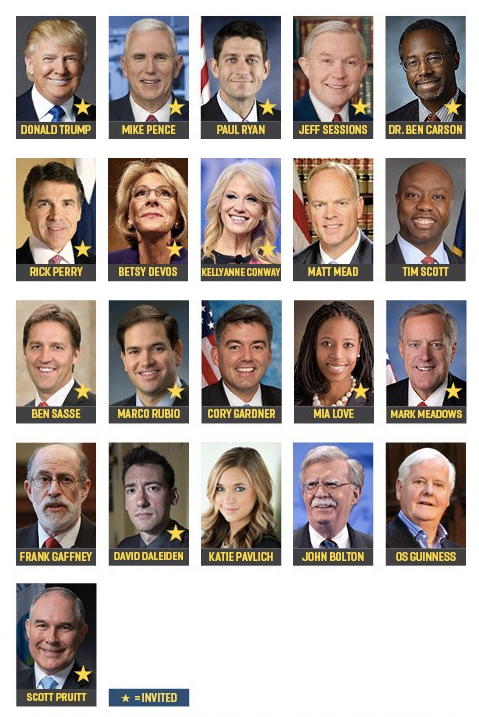 As you can see, just about every real high-profile speaker is listed as “invited,” with only a few much more B-List conservative celebs listed as confirmed. Normally, you’d think a little gold star would mean someone was confirmed–but as you can see, the Western Conservative Summit invites first and asks questions later. This isn’t the first time WCS has done this, but the unconfirmed list seems a lot longer than usual this year. And some of the other “invited” guests are…well, a little strange:

Will President Donald Trump reprise last year’s campaign-trail stop at WCS, which was greeted by raucous protests? That remains to be seen, but if they can’t get anyone above the level of anti-Islamic conspiracy theorist Frank Gaffney to headline this thing, attendance is liable to be a little down. We’re at least hoping Kellyanne Conway is allowed out of the White House to attend. Also, what ever happened to Geert Wilders, the Dutch Islamophobe politician who now-Senate President Kevin Grantham celebrated as some kind of hero for Wilders’ call to ban the construction of mosques?

It’s a party every year, folks. Stay tuned to see which right-wing luminaries make time for it.