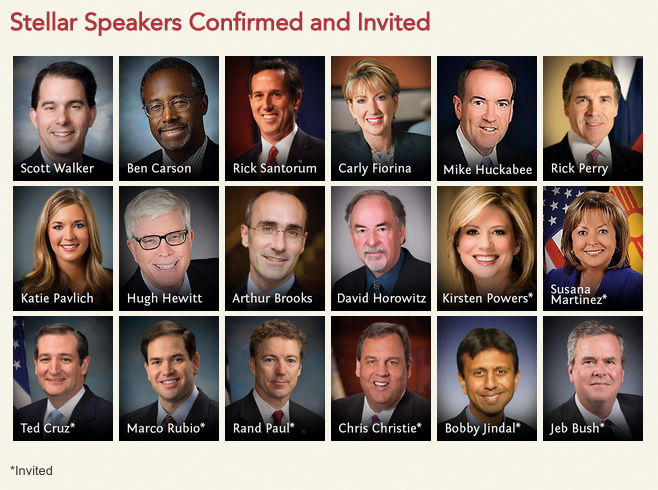 As you can see, a number of the heaviest hitters are listed as “invited” as opposed to actually confirmed, giving the lineup space to evolve with the 2016 GOP presidential field. For example, Jeb Bush might go either way on showing up to the WCS, depending on whether the conservative base is most likely to cheer or heckle–as of now there’s a decent chance of both. Rick Santorum and Mike Huckabee are guaranteed to show, since their calendars are pretty much clear for the rest of their working lives. We haven’t seen if controversial anti-Islamic Dutch politician Geert Wilders is coming back to WCS this year, but he might be too busy defending himself in court from discrimination charges in the Netherlands after promising to organize “fewer Moroccans.”

On the upside, the Western Conservative Summit has expanded from a small regional conference to one of the more prominent such gatherings nationally, and Andrews deserves credit for growing both this conference and his Centennial Institute into an important stop for upwardly mobile Republican politicians. Though not without controversy: last year, WCS made dubious national news after Andrews introduced a “code” for participants in this “nonpartisan” conference to use, referring to Republicans as “steak” and Democrats as “tofu” so as not to attract the attention of resident Barack Obama’s IRS–validating the concern over obviously partisan “nonpartisan” nonprofits like the Centennial Institute, but pulling down lots of laughs from the audience.

No surprise to anyone, nothing but red meat on the menu again this June.