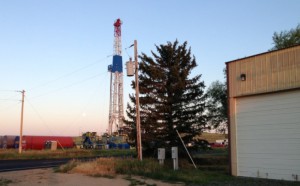 Two new and concerning stories going into Memorial Day weekend promise to keep the controversy over oil and gas drilling in proximity to homes and other surface development in Colorado red-hot–the first being a frightening update from the Firestone neighborhood where a home exploded last month after unrefined gas from a leaking flowline seeped into the structure:

Two high concentration pockets of flammable methane gas have been found underneath a street in Firestone’s Oak Meadows neighborhood, where one house already exploded, according to the state’s vapor test findings.

“Monitoring point data indicate that methane in soil is not migrating to occupied residences,” a Colorado Oil and Gas Conservation Commission presentation says…

Both sites are located along a flow line attaching the oil and gas well linked to the house explosion and its production collection battery to the west. 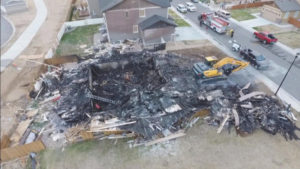 The presence of additional seeps of methane in the immediate area of last month’s home explosion could be seen as confirmation of residents’ worst fears–mitigated by the fact that authorities are already on the scene dealing with the previous disaster, which could be the only reason these new seeps were detected. Testing continues to determine if other gas seeps are present in the area, and to what extent they could threaten the neighborhood built over the wells.

The second story? Another fatal explosion yesterday, this one just a few miles north of Firestone at an Anadarko-owned storage facility, as the Colorado Independent reports:

One worker was killed and three injured near Mead when an oil tank battery exploded [Thursday] afternoon.

Mountain View Fire Battalion Chief Roger Rademacher said three workers working near the tank battery were injured and transported by ambulance. One has serious injuries and the two others are moderately injured. Sheriff’s officials confirmed early this evening that a fourth worker was killed in the blast.

By 6 p.m., police cars had blocked all access roads to the facility. A family, accompanied by a man in a hardhat, could be seen weeping near a road next to the site of the blast. They asked to be left alone and not to be photographed.

The unfortunate fact is that accidents involving oil and gas workers are much more common than disasters like last month’s home explosion in Firestone. Each year there are fatalities from accidents like the one at Anadarko’s storage facility in Mead yesterday. But coming so quickly after the Firestone home explosion and relatively close by, yesterday’s fatal explosion only adds to a freshly growing sense of unease among the public.

Against the backdrop of these events you have an energy industry working overtime to contain the public relations damage, and to mitigate possible regulatory responses that could impact profitability of energy producers. Energy industry PR responses to these events closely parallel lobbying by the gun industry following mass shootings: affected sympathy for victims, followed by expressions of futility in preventing such accidents.

To which we can only say, much like in 2013 when horrific mass shootings finally motivated Colorado lawmakers to take action on gun safety, there comes a point when the body count overcomes the lack of political will.

And that day may be fast approaching.