Mike Coffman Begs Gardner, Colorado GOP To Shut The Hell Up About “Fake Protesters”–And We Think He Means It

In the aftermath of yesterday’s brutal town hall starring perpetually embattled GOP Rep. Mike Coffman of Aurora, the Colorado Republican Party swung into action to denounce the “fake protesters” who “disrupted” the event, preventing “actual voters” from participating–this despite the fact that attendees had been carefully screened to allow only residents of Coffman’s congressional district to get in:

In response to this broadside, 9NEWS’ Kyle Clark asked a simple question–and the Colorado GOP doubled down: 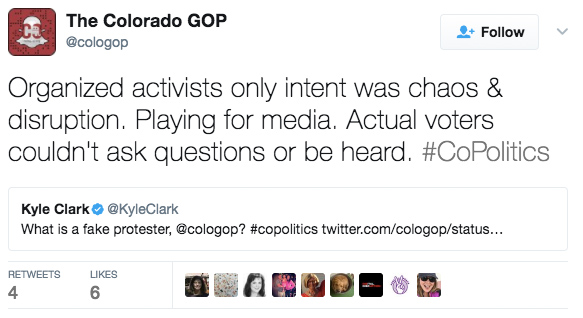 Paying out a little more rope, Clark suggests the obvious–and gets even more smack: 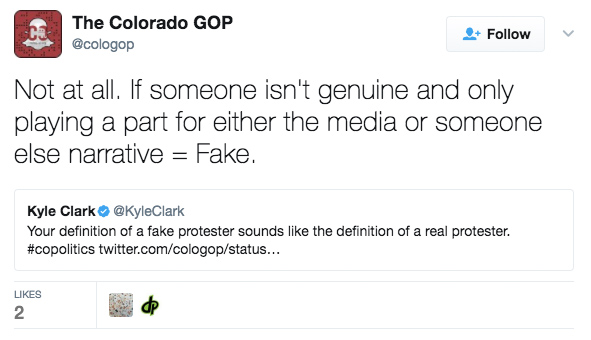 With that, we’re pretty sure there’s no mistaking, this is how the Colorado GOP feels.

Of course, this is fully consistent with Sen. Cory Gardner’s allegation back in February that the throngs of protesters gathering weekly in Skyline Park outside his Denver offices were “paid protesters,” a charge readers will recall he was preposterously unable to defend when asked basic questions about it. Despite this, we haven’t seen or heard any retraction or apology from Gardner–and the state party’s doubling down on the allegation makes it all the more likely we never will.

Until a short while ago this evening, when Clark circled back with Rep. Coffman in a detailed interview about last night’s experience:

COFFMAN: You know, I really don’t. You know, God bless the Republican Party for what it does, but I don’t–the fact is that they had to register for the event because we wanted to make sure that the people were from the district. And so, ah, uh, I thought it was a great event, I thought it was very lively, uh, I thought, I felt they were very committed, uh, to their issues, uh granted the audience leans left relative to the district, but they’re the people who are most concerned. With potential changes, mostly to Medicaid. And so I respect the fact that, you know that they were there, they were voicing their views, and they were not shy about it.

CLARK: You got intelligent, thoughtful questions last night. I mean, they, they weren’t just out there to throw barbs, I felt like you got solid questions, that challenged where you stood on things. More broadly speaking, clearly there are groups of voters who get organized to go to these events t make noise, and your opponents are going to make hay out of that, and conservatives did the same thing when Obamacare was coming down the pike a couple of years ago. Do you wish the folks in your party would just move past the idea of calling them ‘fake,’ or ‘paid,’ and just engage?

COFFMAN: Yeah, I think so. I mean, I mean the fact is that, I think that the reality is, that sure there are some organizers there. But the vast majority of these people are simply committed activists in their own right. Uh, and they are not paid. They are simply, this is where their heart is. And I respect that.

However you feel about Coffman’s performance last night, or the answers he gave (or failed to give) to very specific and thoughtful questions leveled at him, his response is an expression of basic decency in the face of differing views that very many Republicans–not limited to the two examples above–have either forgotten or never possessed.

All the criticism of Coffman’s awful performance last night is warranted, and he’s doing a commendable thing by not trashing his constituents in response the next day. Life doesn’t always fit into a neat little package, and both of those things can be simultaneously true. We’d be inexcusably remiss if we didn’t give Coffman at least a small atta-boy for showing the voters of his district a modicum of respect.

And now, it’s time to “circle back” with Cory Gardner.